I’m a sucker for castles, romance, history, intrigue and the odd ghost story.  So naturally Larnach Castle was on my list of must go places in Dunedin.

When we travel we give the kids a day to plan each.   Luckily for me this was Kiki’s day and she too is a sucker for castles so it was on her list too.

The drive to Larnach Castle was one of the first big surprises for me.  Winding up over the Portobello Hill the views are absolutely sensational. We struck a perfect morning and the harbour was flat and the sky blue.  On a day like this I challenge anyone not to stop and take photos. Once there we set off from the carpark up through the gardens before Larnach Castle unfolded before us.

Now it didn’t go all as planned at this point.  The kids had a fight, James and I stepped in (it’s all over on this blog post if you do want to read about).  Fair to say it wasn’t great.  But this post isn’t about us.  It’s about Larnach Castle so let’s fast forward an hour to normality and when we’re about to go in the castle.  And don’t you wish you could do that in real life!!

Everything about Larnach Castle is grand.  Grand almost on an ostentatious level.  Now don’t get me wrong – I love a bit of over the top glamour but for me it was missing something to give it heart to forgive all the swagger. It begins at the front door as you are greeted at the entrance by twin lion heads.

Before making your way up the impressive staircase.

The lighting for me as a photographer was divine.  It was so dark in the rooms and yet they had all this wonderful light filtering in through net curtains.

We explored level by level.  There was even a piano for Bella to play in one room which was rather haunting. 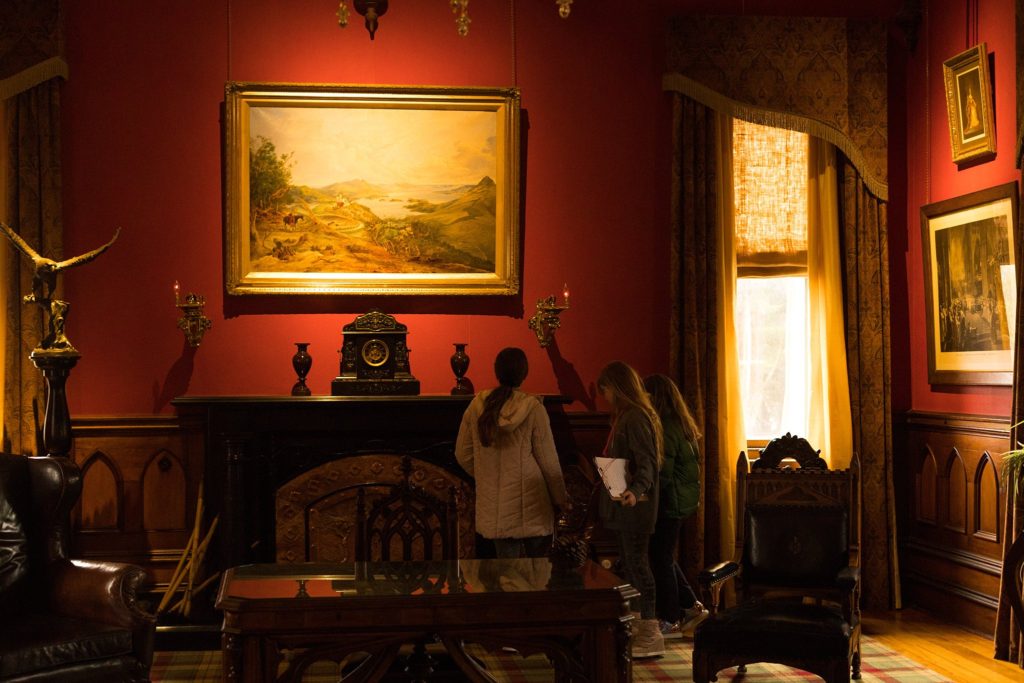 Some of the rooms were light filled, airy spaces…

Others were frankly a little scary….

We wound our way up the tight staircase to the turrets..

Just in time to see rain roll in through the trees. It was quite the site to see the trees swallowed up by a mist of grey and somehow added to the whole experience. As we walked through our youngest whispered to me “do you think it’s haunted”.

Quick google search and the answer is, according to one article we read, “haunted as hell”.

This of course instantly made it 10 times more interesting for the girls and they asked me to tell them why.   So I did in hushed tones as we walked through the corridors.

I often get in trouble when I write my potted histories on here.  Maybe it’s my Irish ancestors who never let the truth get in the way of a good story if embellishing small details or leaving out a small part would make the telling better.  So if you are after an accurate, unbiased history head over to another site.  If you want the version I told my girls then read on…

William Larnach was out one day with his son when he came across this beautiful spot and decided to build a home there.

And it was some home.  Built 1871, it took more than 200 workmen three years to build what is one of only two castles in New Zealand.

William Larnach filled it with the most beautiful things and made it from the finest materials around the world.  He spared no expense.

Now it doesn’t appear the money spent on the castle brought much joy.

Larnach watched as his daughter, first wife and then second wife died from assorted illnesses.

The bank he ran went bust and he was and accused of dishonourable dealings.

And the final straw which saw William Larnach take his own life was when he found his son sleeping with this third wife.

Wow!  So really not such a great time.

It’s unsurprising then that William Larnach’s ghost is said to be a bit tetchy.  In 1994 the castle staged a play about the family.  During the play a gale blew through.  Curtains were blowing and right at the point Larnach was about to kill himself a flash of lightning went through the room.

After William Larnach’s demise the castle was sold in 1907 it was used in the intervening years for a number of things including a lunatic asylum, a hospital for shell-shocked soldiers and a nuns’ retreat.

After that it quietly fell into ruin until the Barker family purchased it as their home in 1967.

Now this part of the story I really love.

The young couple (including Margaret who was pregnant at the time) came across the castle when touring the South Island in a Kombi Van.

They moved in with kitchen floors missing, leaking roofs and decay all around them.

They’ve spent decade restoring it and from the look of the slant on some of the upper floors and the cracks in the wall there’s a fair few things still on their to do list.  But they have taken a piece of history destined for the wrecking ball and saved it for us to all wander through, which I absolutely love and thank them for.

Is it worth visiting.  Oh absolutely.  I loved exploring it.  But don’t expect to get warm fuzzies from it.  It’s just not that kind of a place…  All the details are over here.