Taking a detour to Antarctica on the way home

Now as you know, we are all about getting lost.  Sometimes though I find with kids it’s a good idea to have a bit of an idea of the general direction you might get lost in so tonight I planned a surprise detour, wrapped up in the guise of getting lost to Auckland Museum’s Antarctica – ‘while you were sleeping’ installation.

It was the first of the 3 night display (a world premier no less) but together by Visual artist Joseph Michael and composer Rhian Sheehan where the Auckland Museum becomes the canvas for a 360 degree projection of an Antarctic iceberg.  Alongside the awesome projections is the sound of ice cracking, groaning and dripping as well as large portions of ice crumbling away down the side of building. 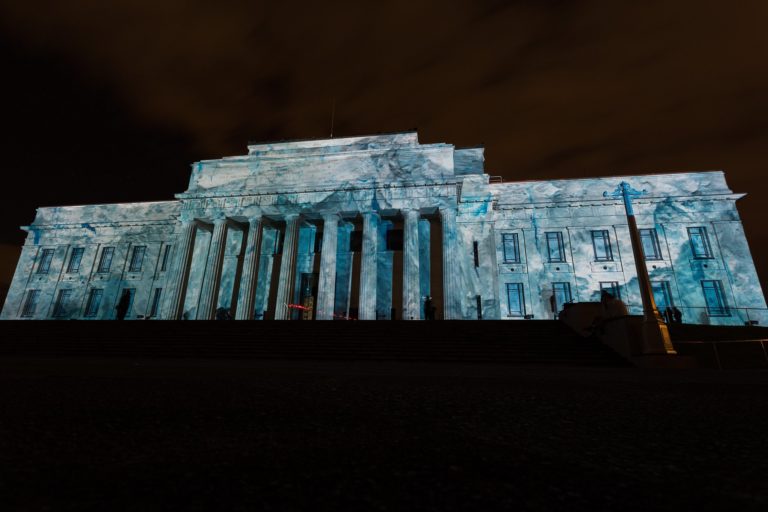 As I said, this was a little bit of engineered serendipity in finding this (rather than the authentic getting lost).   As I tend to do with these things I maybe went a little overboard on the set up.  I told the kids we would keep driving until we found a wood and some snow.  Now of course the kids thought this was awesome!  Driving all night – no bedtime.  But they were a bit suspicious when we rather quickly stumbled on some woods and I could hear them whispering in the back seat – “I bet there is snow at the top!”

So it was clearly not the authentic getting lost we usually but the kids loved it none the less and how often do you get to go to Antarctica on the way home?  It kicks of at 8.30 and is on for two more nights on the 25th and 26th so plan to get in early if you have little ones who get tired (there’s a bit of walking if you want to get right around it).  Take along some blankets and grab a bite to eat at one of the stalls there.

On the way back home the kids were grumbling about me faking our getting lost so I agreed to follow the first car to turn off the motorway.  It was 10pm at night and it turned off at Stafford Road so we followed in hot pursuit.  It headed, as most cars getting off here at 10pm on a Friday night do, under the harbour bridge.  The kids were in hysterics as we raced around after this car under the bridge.

“See”, they said, “getting lost is so much better when you don’t plan it!”  And maybe they are right.  But if you want to engineer a bit of serendipitous getting lost then head out of Antarctica.  Or for the more impromptu adventure – follow pretty much anyone off Stafford Road….  😉