Taking a stroll on the Seabird Coast

We are frequent visitors to the Coromandel and the Hauraki Plains.  Up until a couple of years ago the plains were home to James and his daughter and now we travel there at least once a fortnight to visit family, to go exploring or on holiday.  We’ve been so many places around this beautiful region but today was my first time exploring the Seabird Coast and I’m a little shocked that it took me this long to get to this absolutely awesome spot that is only a one hour drive from Auckland!

We were heading down today to pick James daughter up from a weeks holiday with her Mum today and James was stopping in to see a mate in Waitakaruru on the way.  I was feeling in an adventuring mood so I grabbed my camera and told me to drop me off “somewhere on the way” and come back for me after an hour or so.

We were about 15 minutes out from Waitakaruru so I said here’s good and he literally dropped me on the side of the road next to a sign saying “Enjoy the Seabird Coast” with the promise that there were walks around somewhere….

I wandered around the little park for a good 10 minutes – pretty lost and not finding any good paths.  James is pretty legendary when it comes to knowing all the good spots though so I knew I couldn’t be far off so decided to head up the road a bit and see what was up there.

A couple of minutes down the road and I came to a nondescript drive with a large wooden sign.  That kind of thing for me probably has the same effect as a flashing neon light does for others!  I practically ran over to it, ready to explore (and quite happy I wouldn’t be taking photos of blades of grass for the next hour while I waited for James to get back).  I was even more excited when I saw that this land had allowed people like me (maybe not a bird watcher but definitely a nature lover) to wander over their land since 1869.  Cheers guys.

There were 2 walks – one a 7 minute and one a 40 minute walk (remember to double these at least if you are carrying a camera).  I figured I would get James to meet me at the other end so set out on the 40 minute walk….

Nothing from the unassuming entrance way prepared me for how awesome this walk was actually going to be!  The views hit you almost instantly once you step through the gates.  Submerged gates and fences pay testament to the recent storms with reflections from the clouds scudding by overhead dancing in the still water.

The path to the bird hide is wide and well cared for and with only a few other people out there today the only sounds I heard was the crunching of our feet on the ground, the distant and occasional car passing by and everywhere the sounds of hundreds of birds.

Now I’m not a bird watcher.  I don’t claim to even be able to tell one from the other.  But I can tell you that there is something so calming about being out here by yourself, looking at the mountains out over the Firth of Thames while listening to the birds all around you that it kind of doesn’t matter.

Along the way is clear signposting, including a hand written note of when the high tides will be for the coming weeks.  The best time to go is a couple of hours either side of high tide.  It was something I didn’t know and I was seriously tempted to go back in a few hours and I think I would have if the rain hadn’t set in.  Regardless of high tide or not, there were birds everywhere and people almost no where.

Heading on further the path turns from boardwalks to paths carved out in the grass between the soggy fields.  Despite the dousing that we have all had it was remarkably dry under foot the whole way though.  I picked my way through, stopping to take pictures and read all the information every now and then.

After a while James called to see where I was.  An interesting question.  I’m about here…

Not entirely a landmark so I told James to turn on the find my i-phone and meet me somewhere by the road.  I didn’t quite make it to the Pukorokoro  Miranda Shorebird Centre but ended up going a little cross country and jumping a fence when I spotted James car.

All up – a brilliant way to spend an hour and I reckon I could have spent a few more there, especially if I had of gone a couple of hours before or after high tide.

While you are exploring over this way make sure you head up a bit further and check out the Guy C Goss shipwreck too.  You can check out our story of exploring this wreck over here. 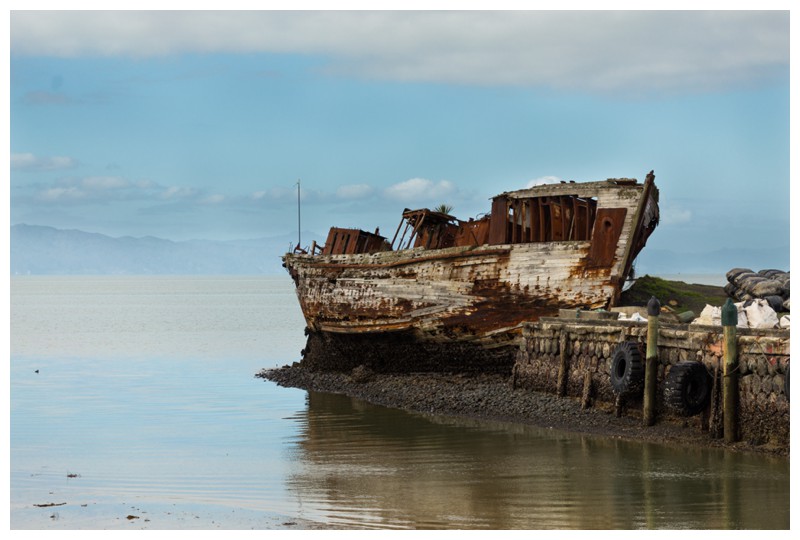