The ultimate road test for the Camper Edition

Kiki and I road tested the newest Getting Lost Game – The Camper Edition in a quirky little camper called Brendan.  We spent 5 hours driving around the outer edges of West Auckland on a warm March evening, going no where in particular but at the same time building a series of amazing stops, making it up as we travelled it.

We started our adventure in the steep, windy woodland streets of Titirangi.  Nestled in the bush is the home of Leanne and Dan – owners of Quirky Campers in NZ.  Waiting at the bottom of their drive was Brendan.  Hailing from the Coromandel (where we also spend a large part of our time), Brendan is kitted out in pine felled, milled, dried and dressed locally. 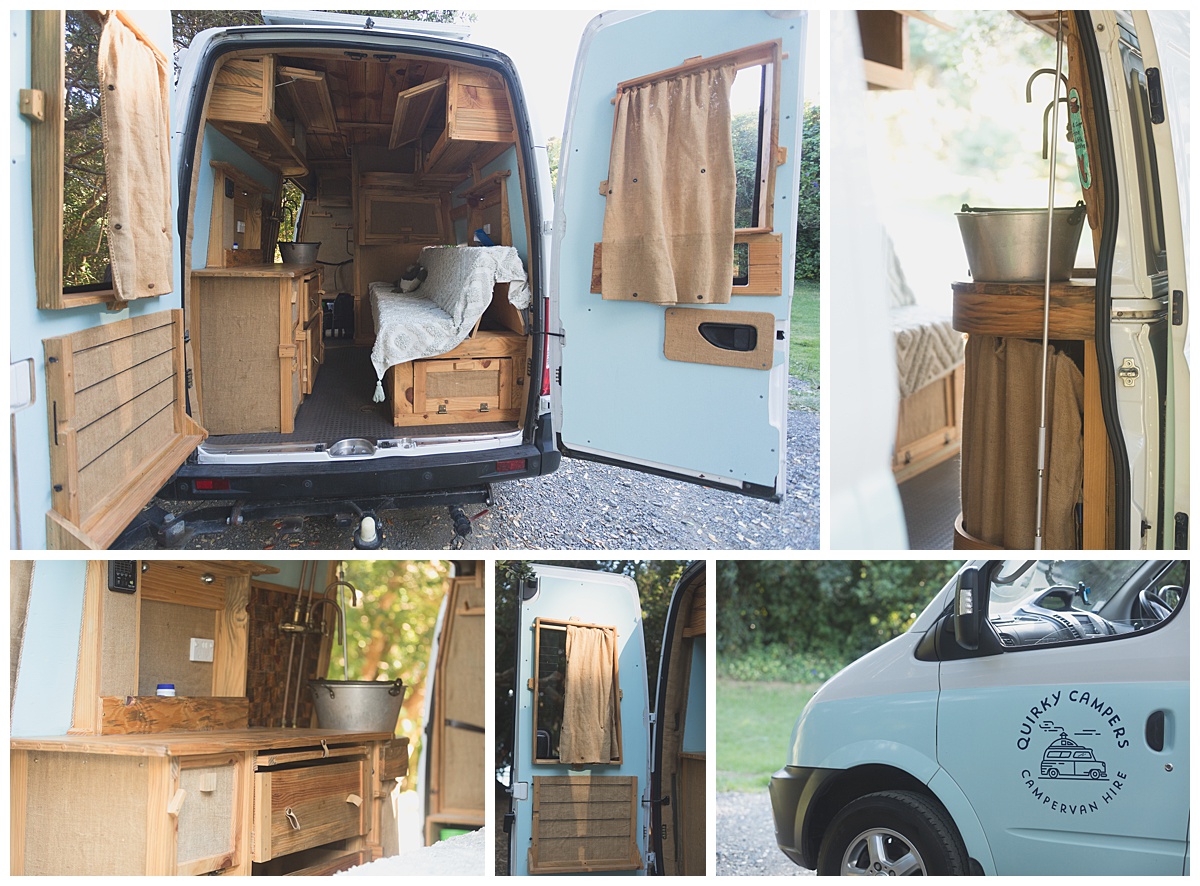 We had a quick tour of Brendan from Leanne and Dan and instantly fell in love with the old jam pan that serves as a kitchen sink. 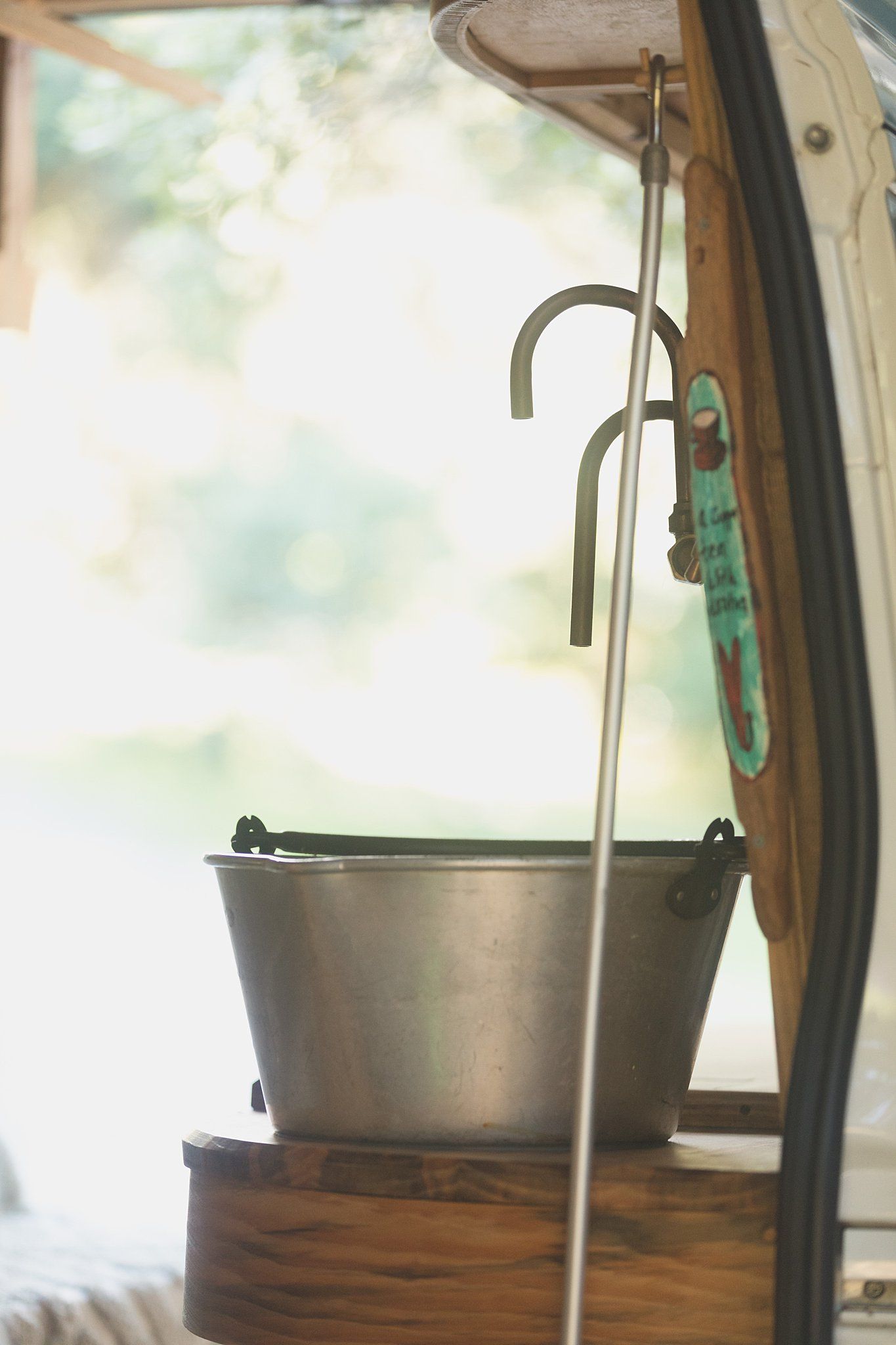 And then we were off – Kiki (our 14 year old daughter) and I on an adventure. 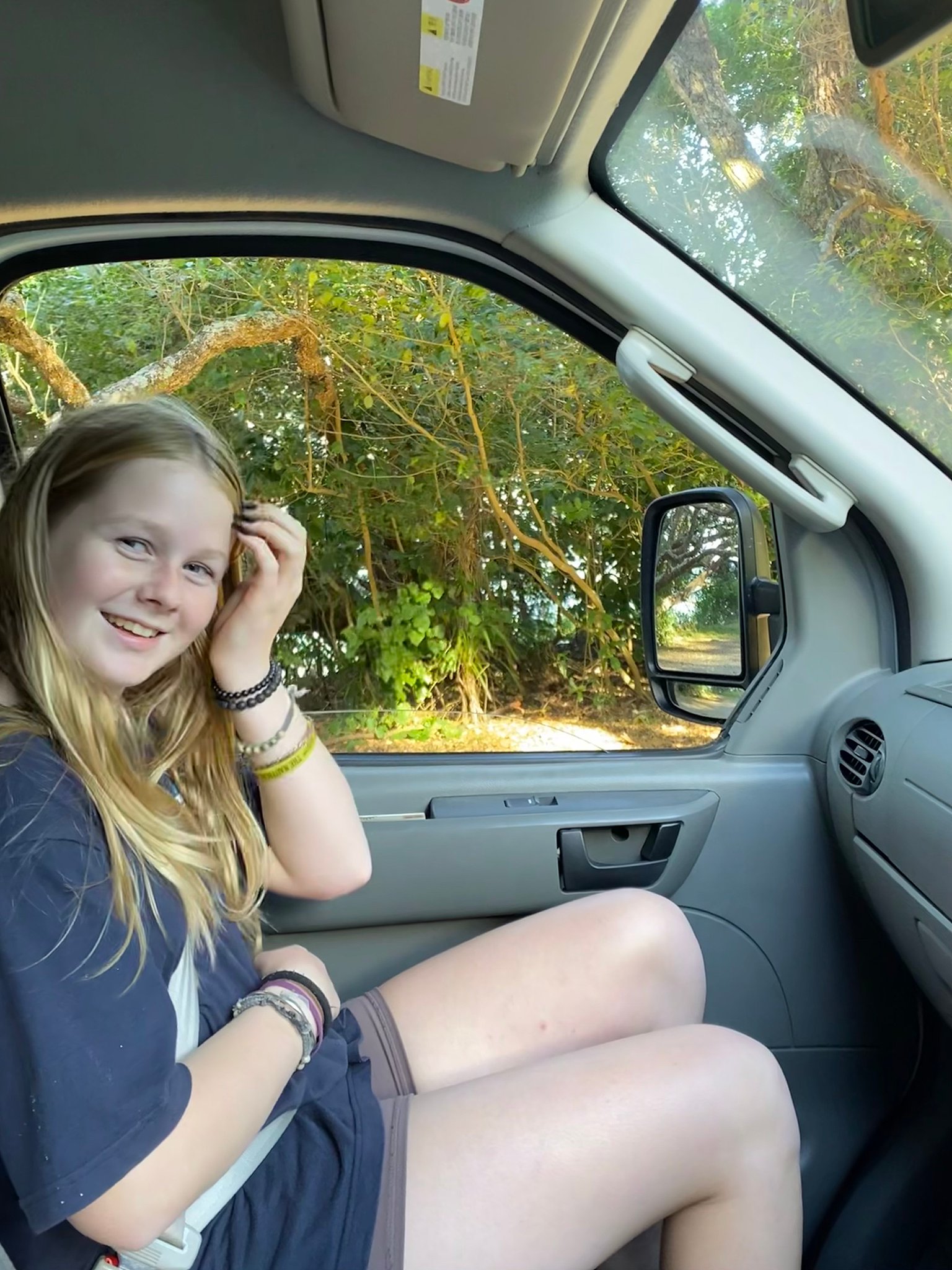 Now the purpose of this trip was to get some photos for the new Camper Edition.  We probably should have planned a shoot list with locations and shots.

So we found ourselves, me driving and Kiki my second shooter, without a plan – but fortunately with a whole bunch of Camper Editions.

So we drew some cars.  Our first misdirection “Take the last 2 numbers on your odometer and head north that many miles or KM’s”  We decided opt for the shorter version and take just the last digit (8) and headed in what we hoped was and approximation of north given our relatively limited options. 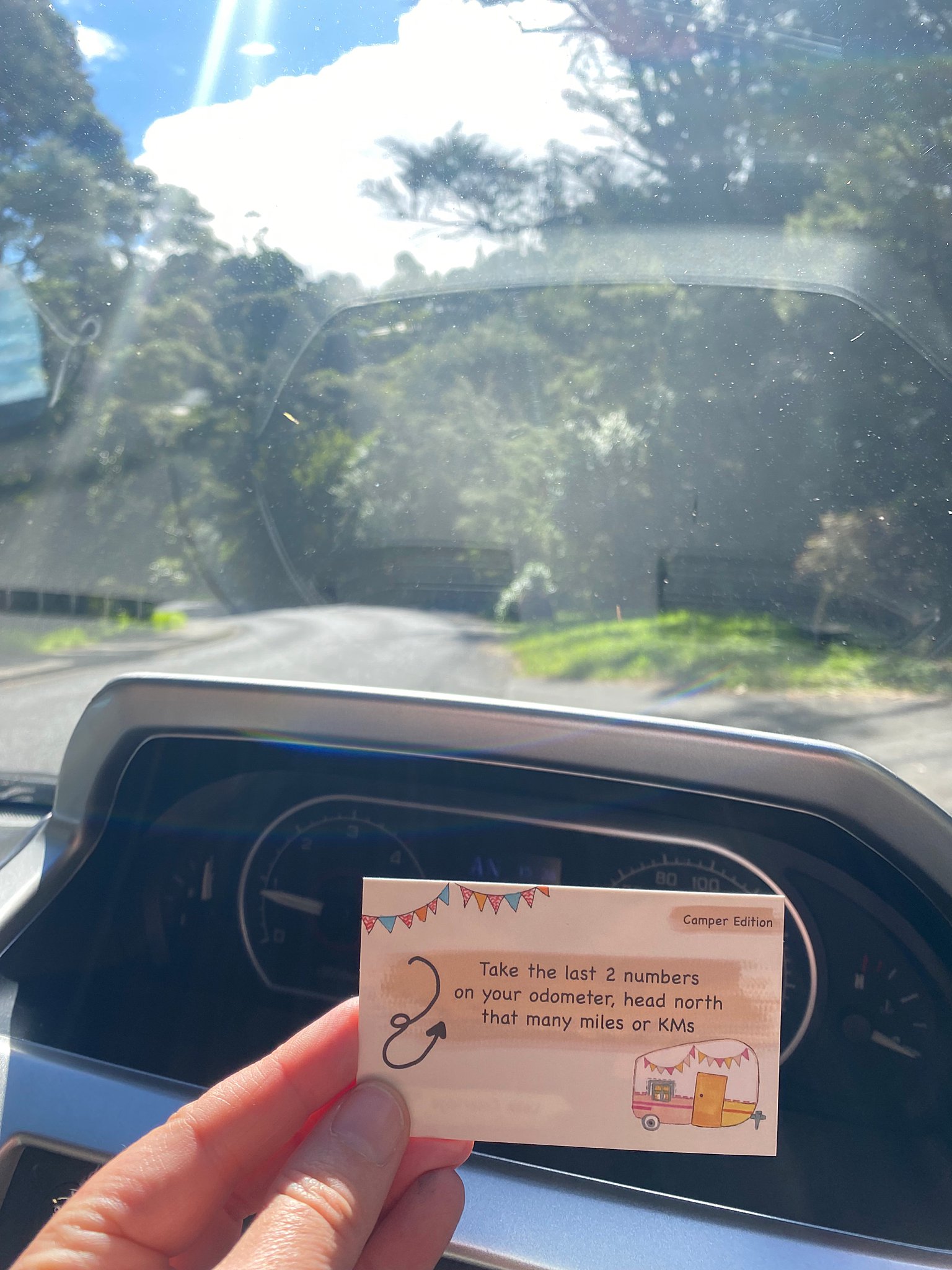 It took us longer than I thought it would to trigger a left turn on our next card after 2 cars overtook us, but I guess the windy roads don’t lend themselves too well to overtaking. 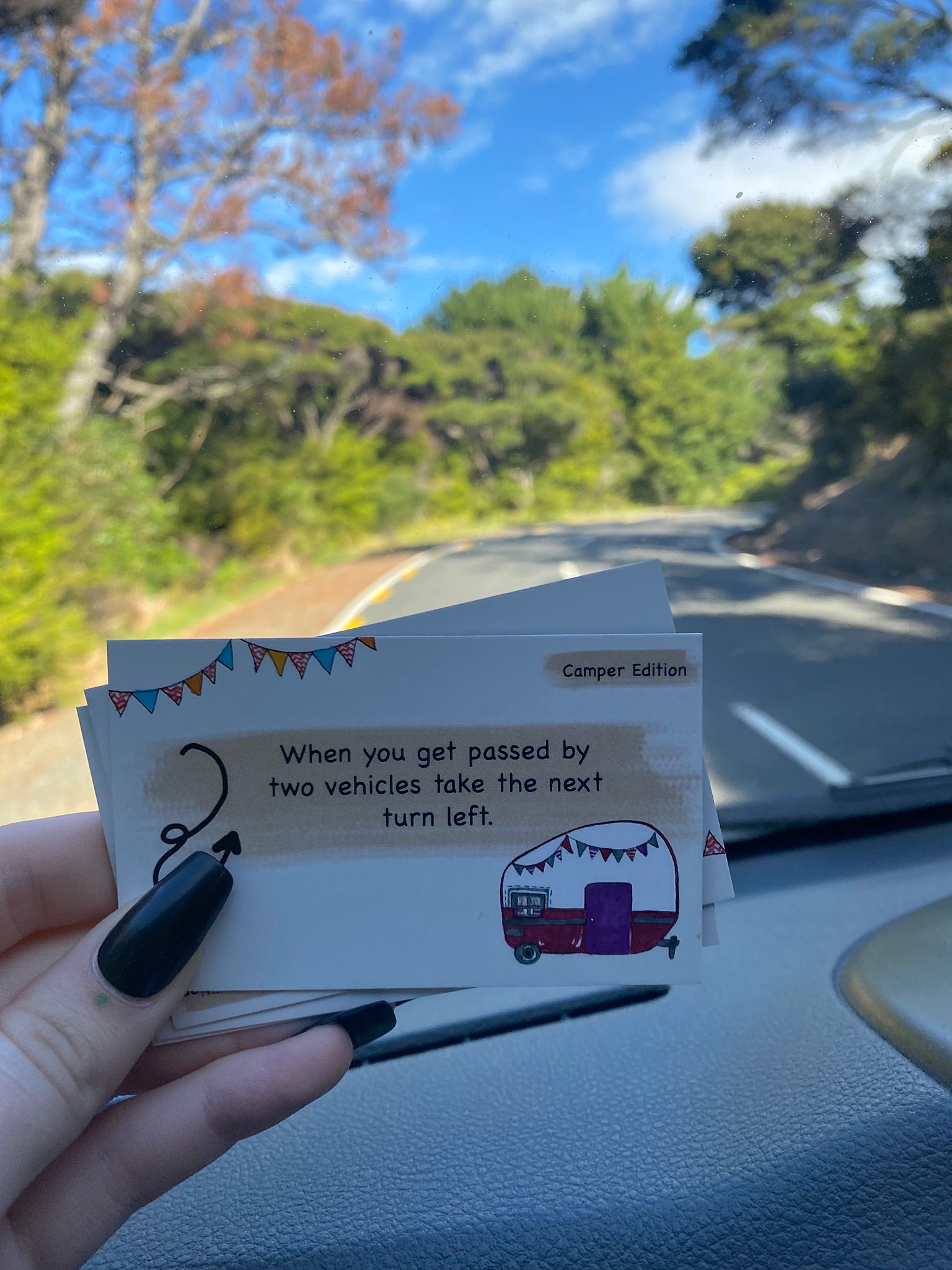 We found ourselves in a pretty spot by some water so we cheated (remembering the purpose was after all to get some photos) and pulled out a couple of activity cards including my personal favourite in the deck which is to stop and read a chapter. 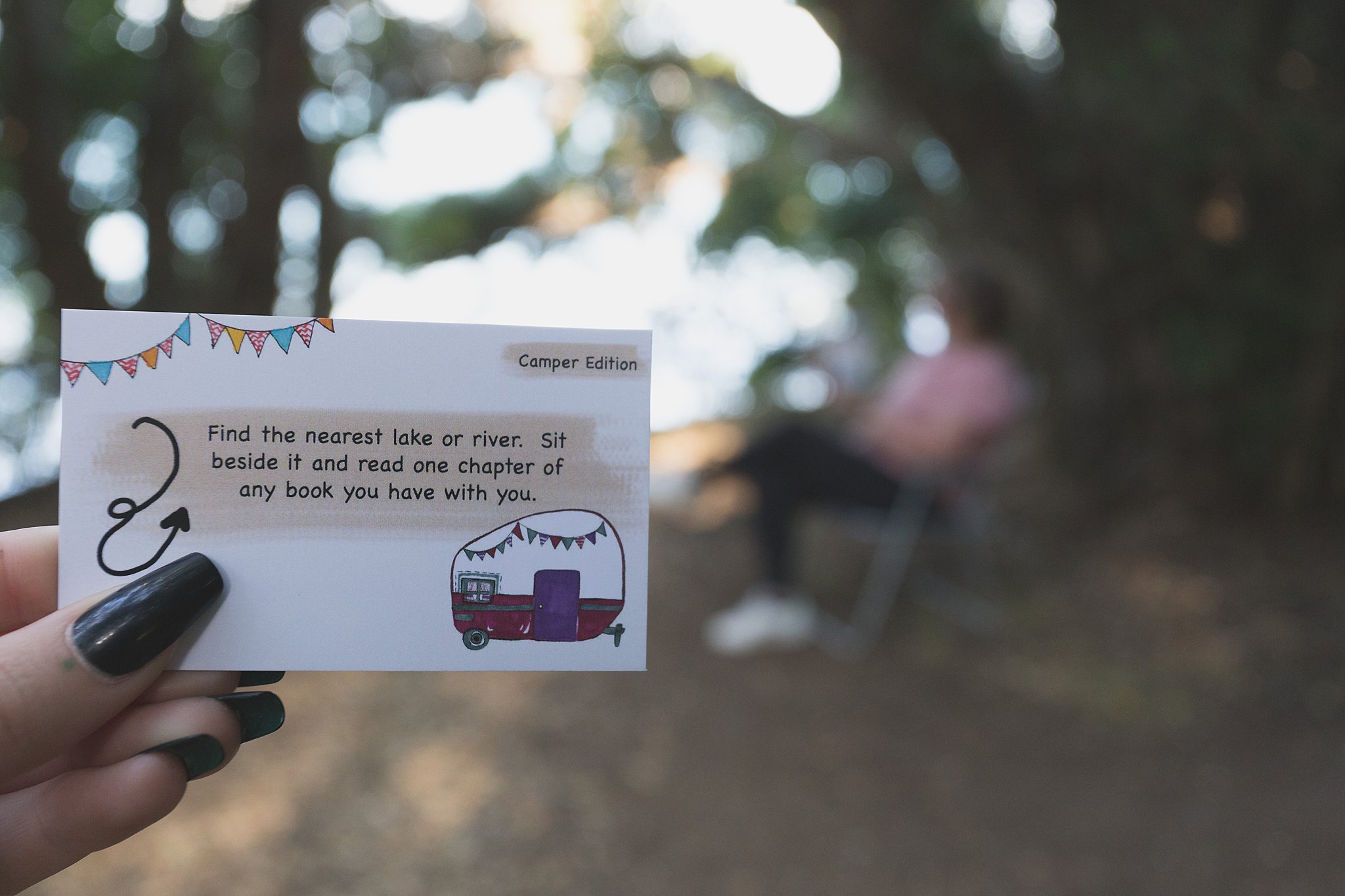 And we decided to also pull out the stop for a cup of tea card.  I was reminded of how awesome it is to have your home on your back and be able to stop and set up like this (although it did take me and Kiki a while to figure out the trestle table and I’m still not quite sure we nailed it). 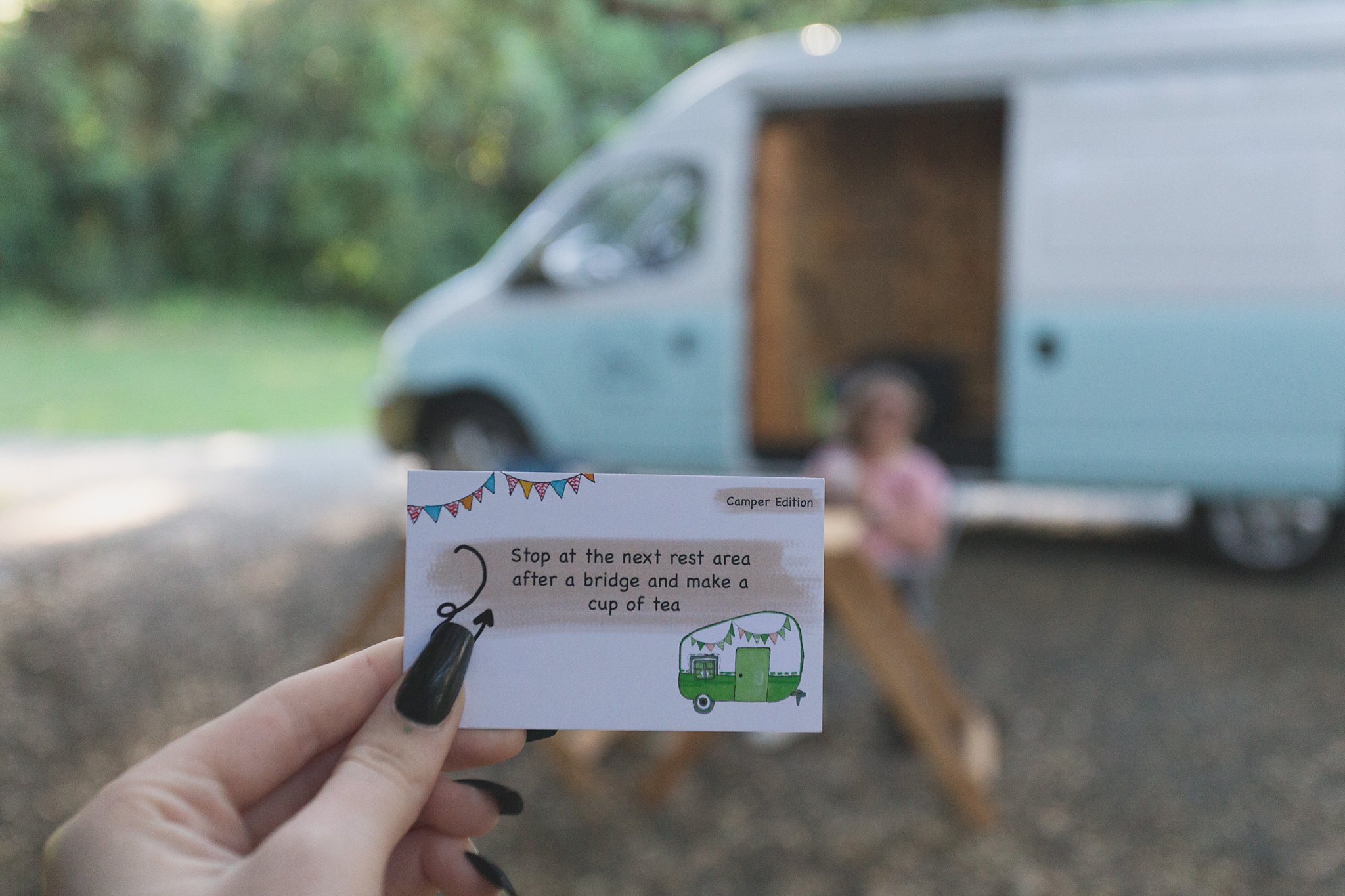 Setting off with no plan still Kiki pulled the next car which was to let the wind chart our direction.  It was blowing west so we decided we should get as west as we could to watch the sun set and pull some more cards on the way.

This proved trickier than it should be as the major road west was closed with road works.  There were detour signs but they were frankly as useful as our misdirection cards are in finding your way to an actual destination.  So we ended up traveling in concentric circles that if someone were to follow us on a GPS would look like a drunk person drew!  At one point I even did a 3 point turn around a round about after finding it a little tight for Brendan!

Eventually however we found ourselves (not at all on the detour route) winding through valleys and hills with amazingly lush greenery surrounding us before finally, somewhere, popping out on Scenic Drive. 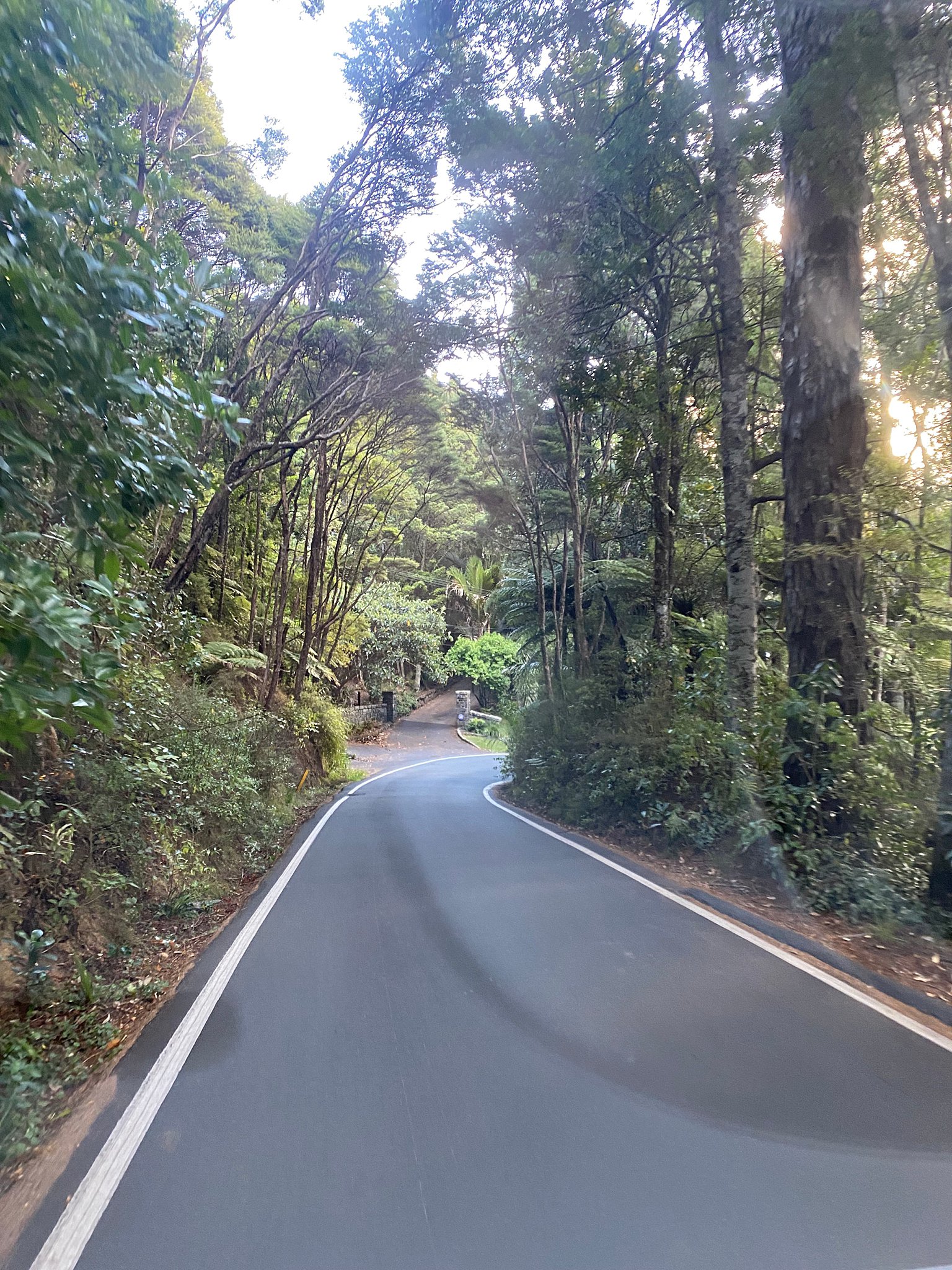 We arrived at Piha just before sunrise.  With time to complete our stop at a roadside stall card when we saw our first one of the day!

We sat, Kiki and I, and watched the sunset.  Each of us happily clicking away on our cameras.  We had 2, plus our phones, which for the photographers amongst you, will know how blissful it is to have all those options at sunset.  Yet another benefit of travelling with so much room to keep everything you need. 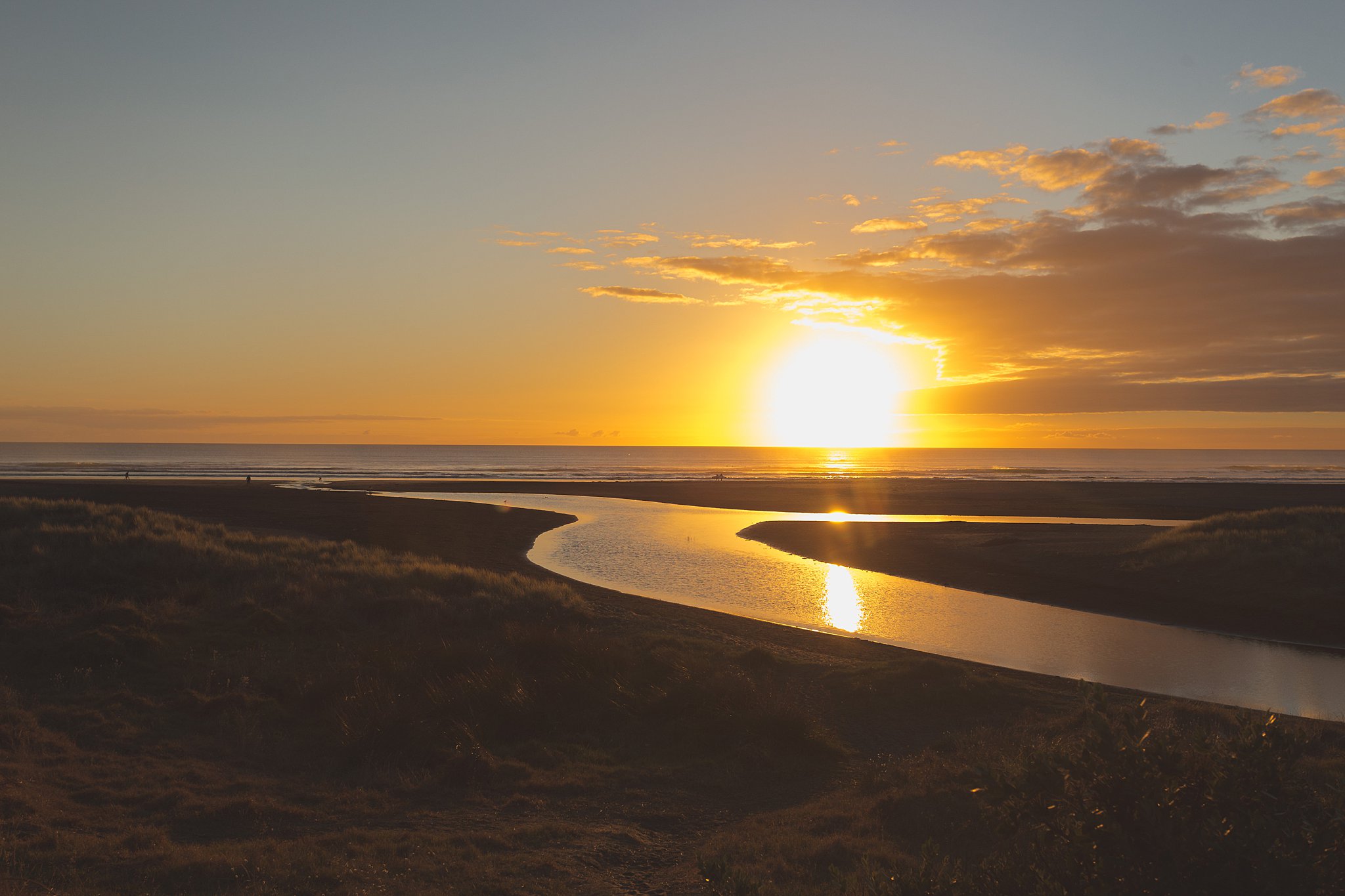 And of course remembering that we were actually here to take a few pictures of the Camper Edition of the Getting Lost Game! 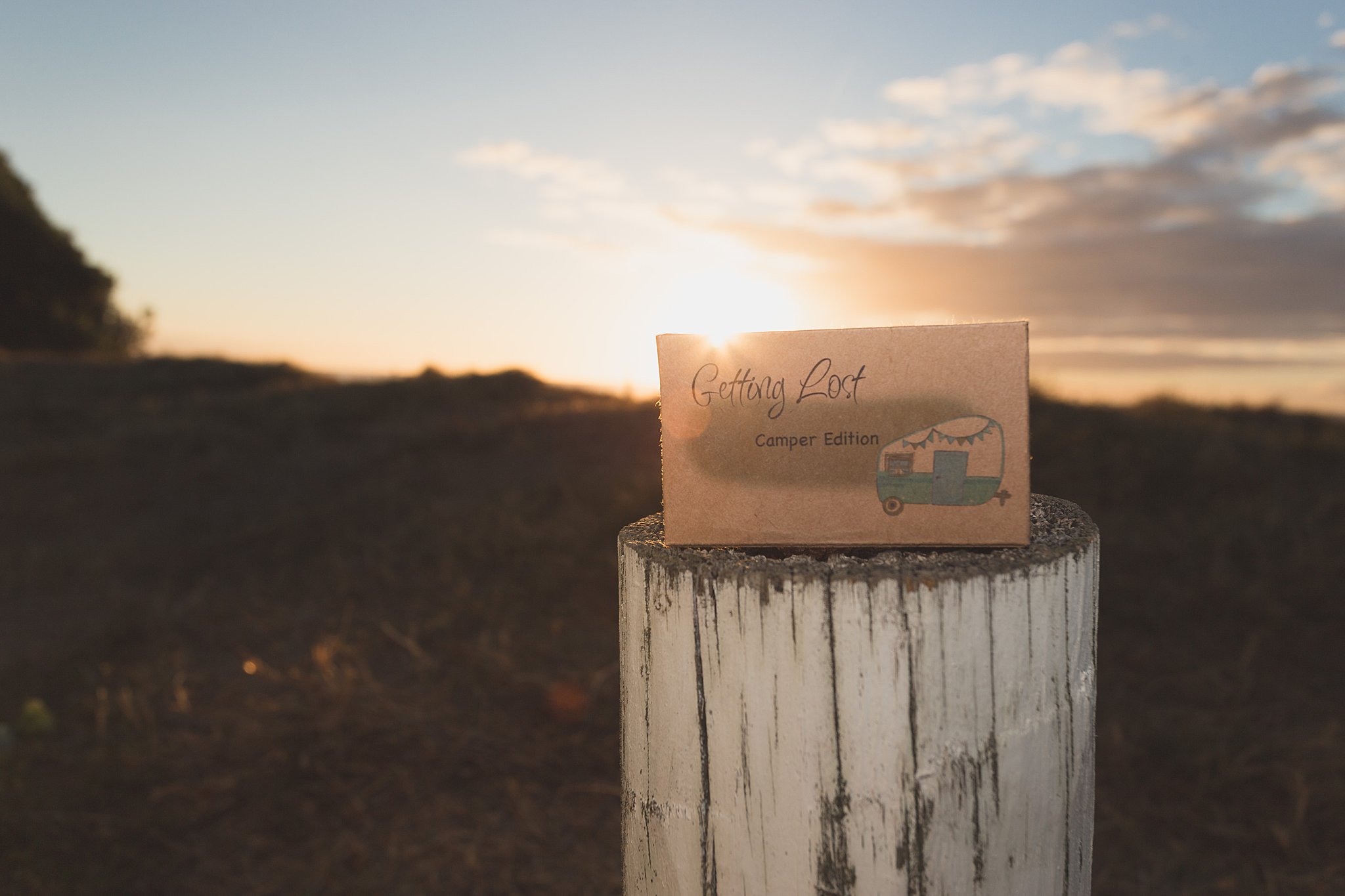 We sat there planning what to do next.  You will all be thankful that we skipped past the “At the next road kill sighting stop at the nearest thrift shop and buy a mug for the camper”.  This was for 3 reasons.  The first, it was now 8pm in Piha and nothing was open.  The second, it wasn’t actually our camper.  And lastly, no one actually wants to see the ensuing photo of road kill!

Heading back there was only one card we still wanted to use – the “Stop at the next pub, tavern or watering hole” card.

Like a shining vista we saw the twinkling lights of The Olive Kitchen as we made our way along the otherwise dark Scenic Drive.  With tummies grumbling after our 5 hours on the road we raced inside hoping the kitchen was still open.

It was, just!  So we sat on the stunning outside deck under the stars and the lights eating the most delicious chips I think I’ve ever had and sipping mocktails.

And then it was time to take Brendan back to his owners at Quirky Campers.  Leanne and Dan met us at the bottom of the driveway.  They asked us what we’d done and where we’d gone.  Kiki and I both looked at each other and said “no where really” because we kind of hadn’t.  We’d been all over in those 5 hours, we’d talked, laughed, taken photos, watched the sunset, drank and ate – but there had never been a destination.  But then that’s kind of the point isn’t it….