It’s not the getting lost that I struggle with.  No matter how busy I am I always seem to squeeze in a few moments for adventures – even if they are just around the corner.  But getting the time to write about them.  Now that’s the luxury.

It’s been a full on couple of months with Getting Lost Games flying out the door.  Not to mention pandemics and just life in general.  It feels like ages since I’ve got to write anything (and in fact looking back at the blog it’s been a shockingly long 11 months since I’ve published anything).

So I’m sitting here, gazing out at the ocean, kids asleep, puppy happily running around with his new mate and finally I have time to write.  All the stories – some old, some new have been swirling around in my head – waiting for a chance to be written.  So many I don’t even know where to start (so forgive me this indulgent pre-amble as I revel in the joy of just getting the words out). 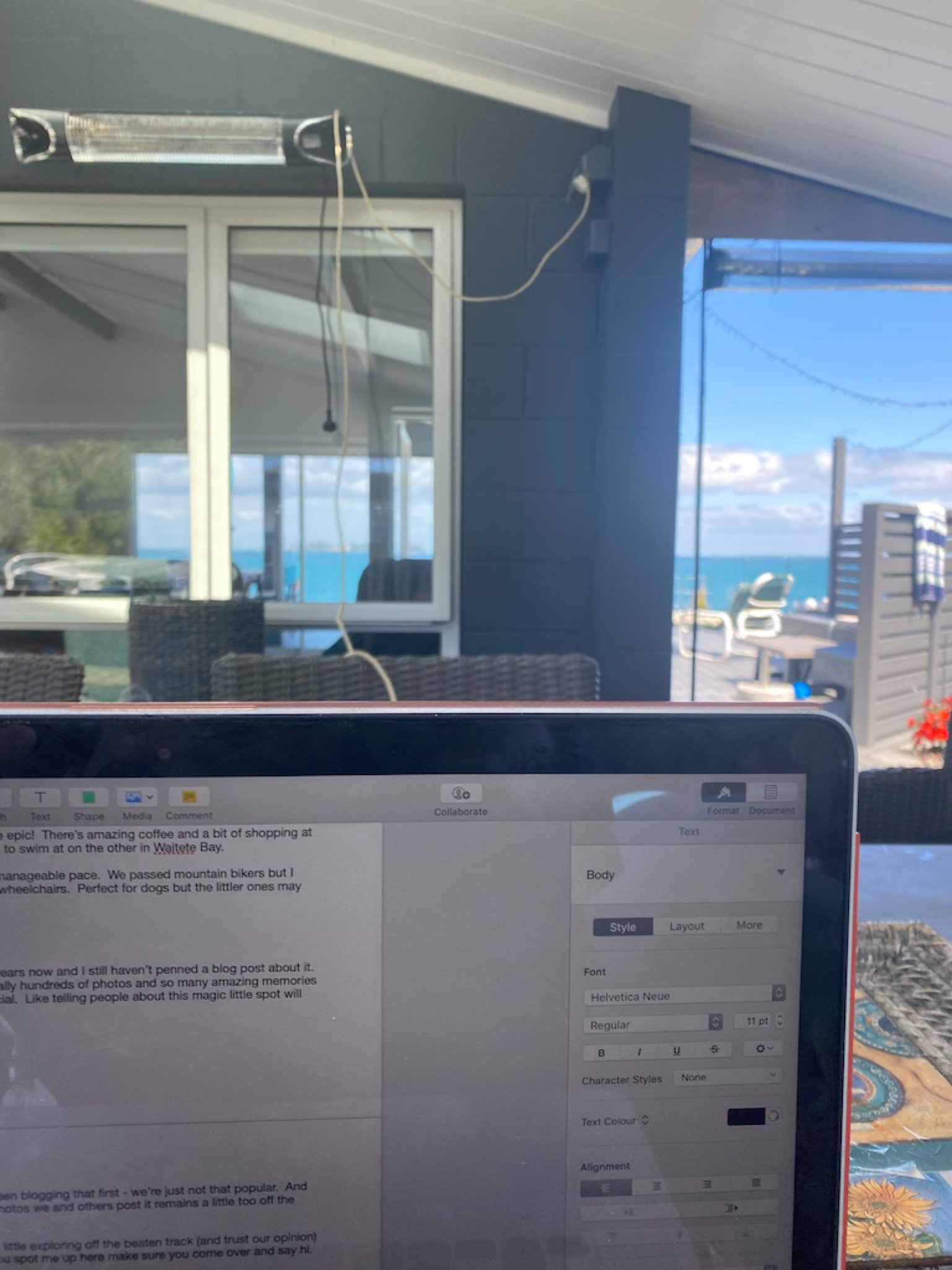 I’m going to start with the most recent of my adventures.  Walking from Waitete Bay to Colville.

We’ve been coming to Waitete Bay now for 7 years.  It’s a magical little spot.  Sandy beaches nestled down a hard to spot gravel road between Coromandel and Colville.  We are very lucky to have James family bach up here (and we’ve written a bit more about Waitete Bay and how you can stay up here too over here). 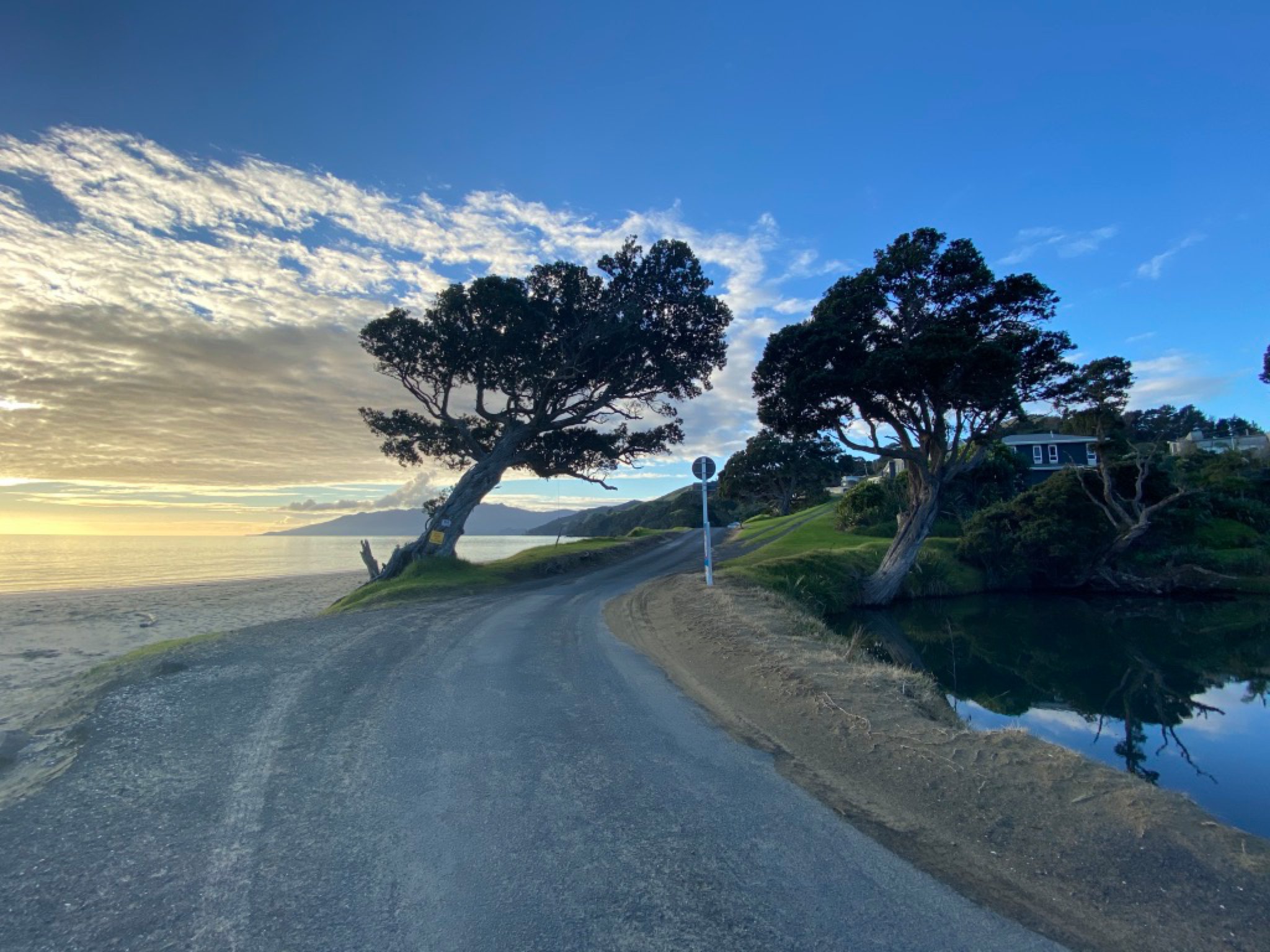 Every year we see the fittest of the walkers head on over the hills to Colville.  It’s an hour and a half walk over a mountain that to me looked pretty huge and my aversion to hills (I once penned the lazy girls guide to conquering Rangitoto) saw this firmly on my “no thank you” list.

However this year has been a year like no other in so many ways.  And one of the unexpected bonuses of lockdown (and in particular a 14 day self isolation where we couldn’t leave the house at all) saw me busting at the seems to walk – anywhere, everywhere.  I was like Forest Gump when he just ran and ran.  I went in ever increasing circles around my house.  Flat at first – discovering all manner of things right in my back yard.  And over time I realised that I was missing a lot not going up hills so I set out to conquer those too.  One step after another and soon they weren’t scary at all.

So this time when I arrived at Waitete Bay I knew, to quote Dr Suess, that my mountain was waiting and this was indeed my day.

I went over the hill with James Aunt Nicky, my puppy Buster and her dog Toby.  This was great for two reasons.  Firstly, she handled the directions (I’ve made 15 games about Getting Lost – there’s a reason I’m good at making those and not finding my way to the spots I’m actually supposed to be at).  Secondly she set a cracking pace and didn’t seem like the sort of person to have a wee break and a breather (although towards the end Buster decided he’d had enough and just lay down and refused to budge so he had a wee carry). 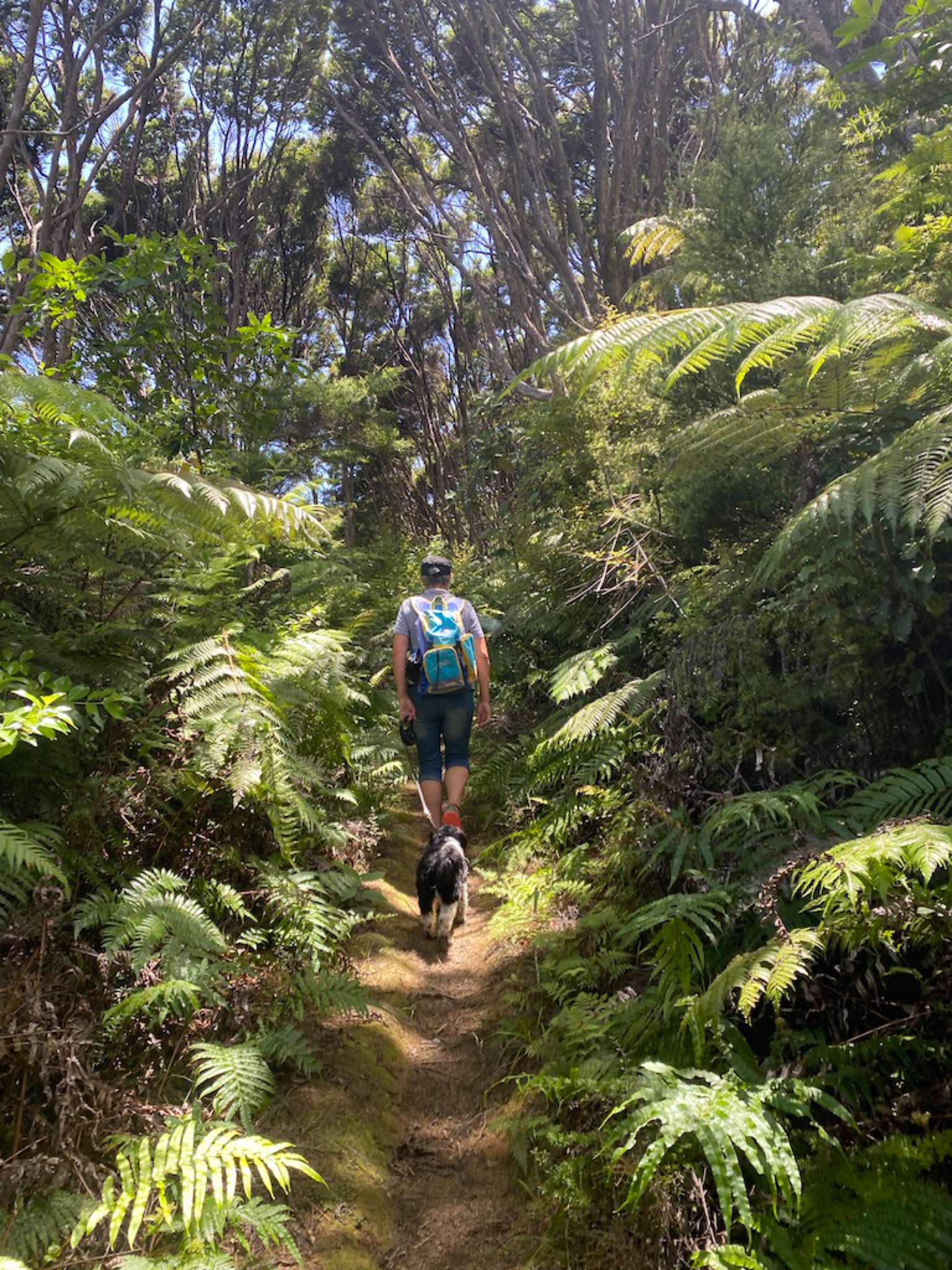 The walk begins, as becomes a great walk, on a non sign posted gravel road.  The walk is so secret that when I was talking to our neighbours at Waitete Bay they said that despite growing up here as kids and exploring all the mountains they only found it as adults.

The road, leaving quickly behind the sandy shores of Waitete Bay, climbs through grassy slopes and increasingly wooded areas.  Near the top is a private residence boating Kiwi’s living there – how special is that?  The path itself is easy to miss (and no, I didn’t remember to take a photo of it) and is just a small patch heading off to the left and as all good secret paths do – with no markings. 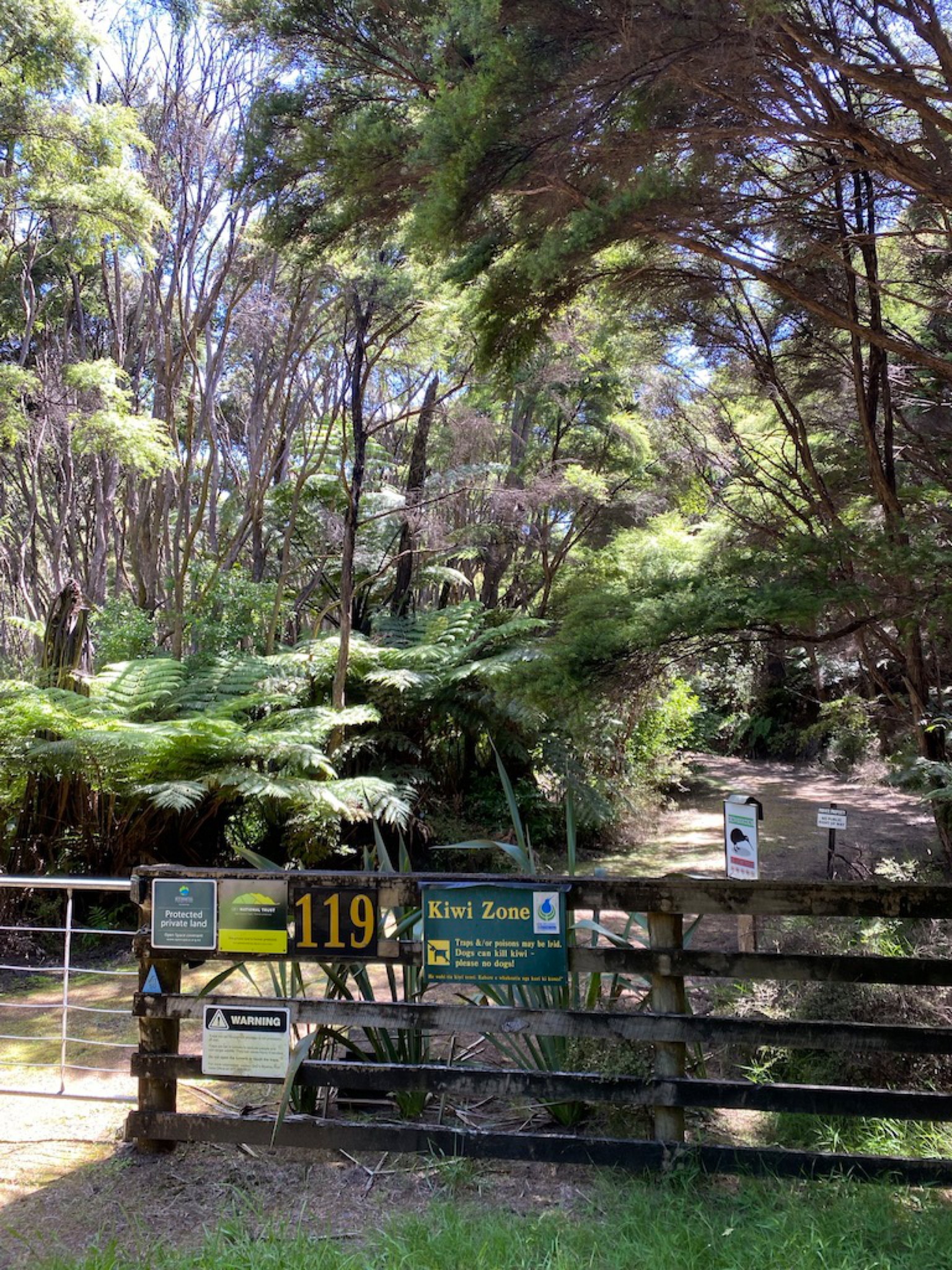 You find yourself quickly, and steeply (sliding in my case as Buster decided he was a Rudolph and I was the unwitting sleigh) heading down into a wooded valley.  The path is narrow, cleared by other neighbours in Waitete Bay so as to make it a very well maintained path.

Birdsong around, even the dogs fell silent as they plodded along and my normally incessant stream of chatter was less (yes, Nicky this is less chat for me although it possibly didn’t feel like that for you!)

About half and hour in we came across a little stream.  Perfect for the puppies to cool their feet and grab a quick drink.  And for me to grab a quick photo. 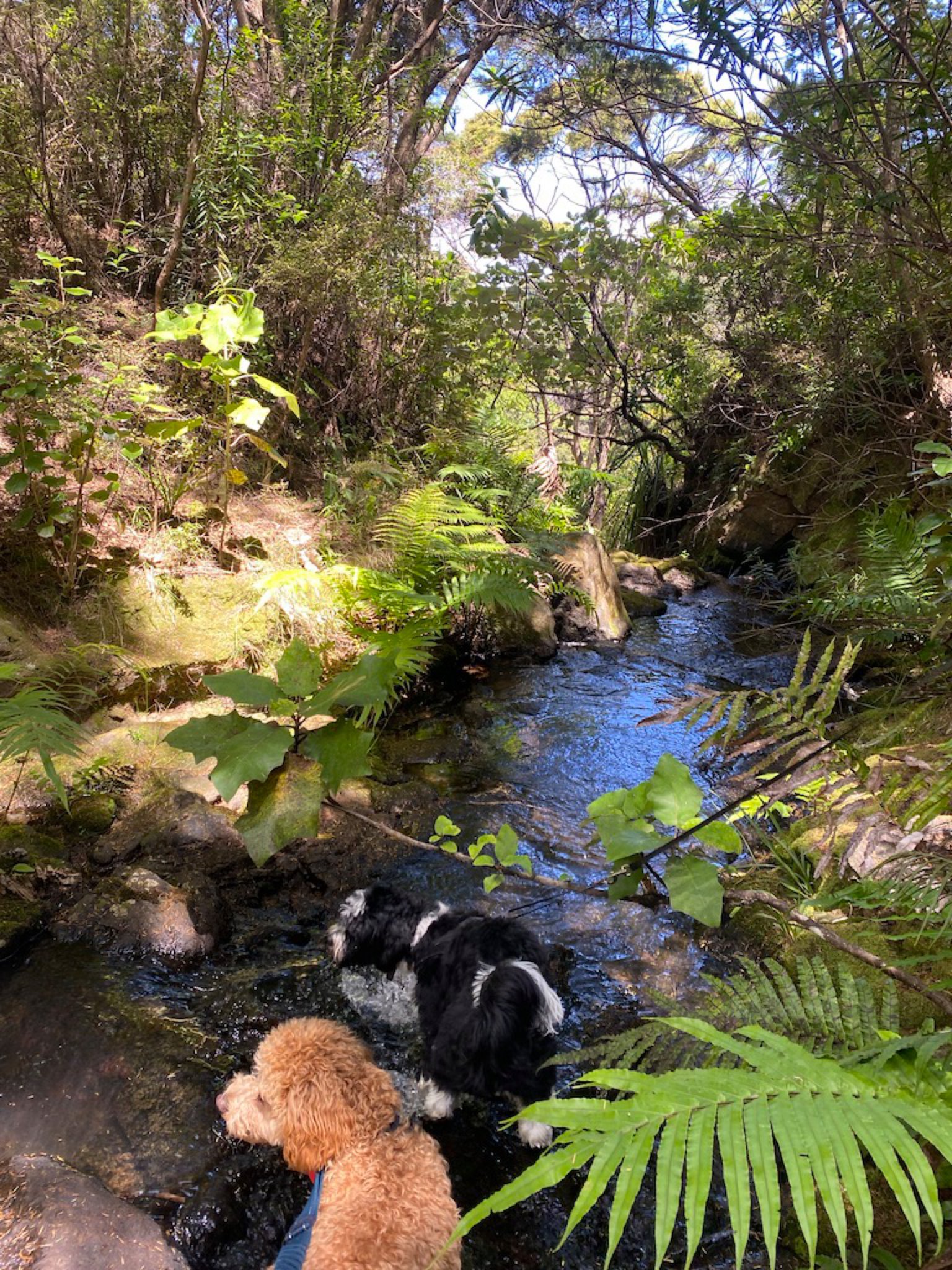 And from there it’s a short wind up the hill to catch a peak of the beach again, the white caps of the morning smoothed out by our elevated view.  It’s crazy to think from this vantage point that I’d been right on that beach just half and hour earlier. 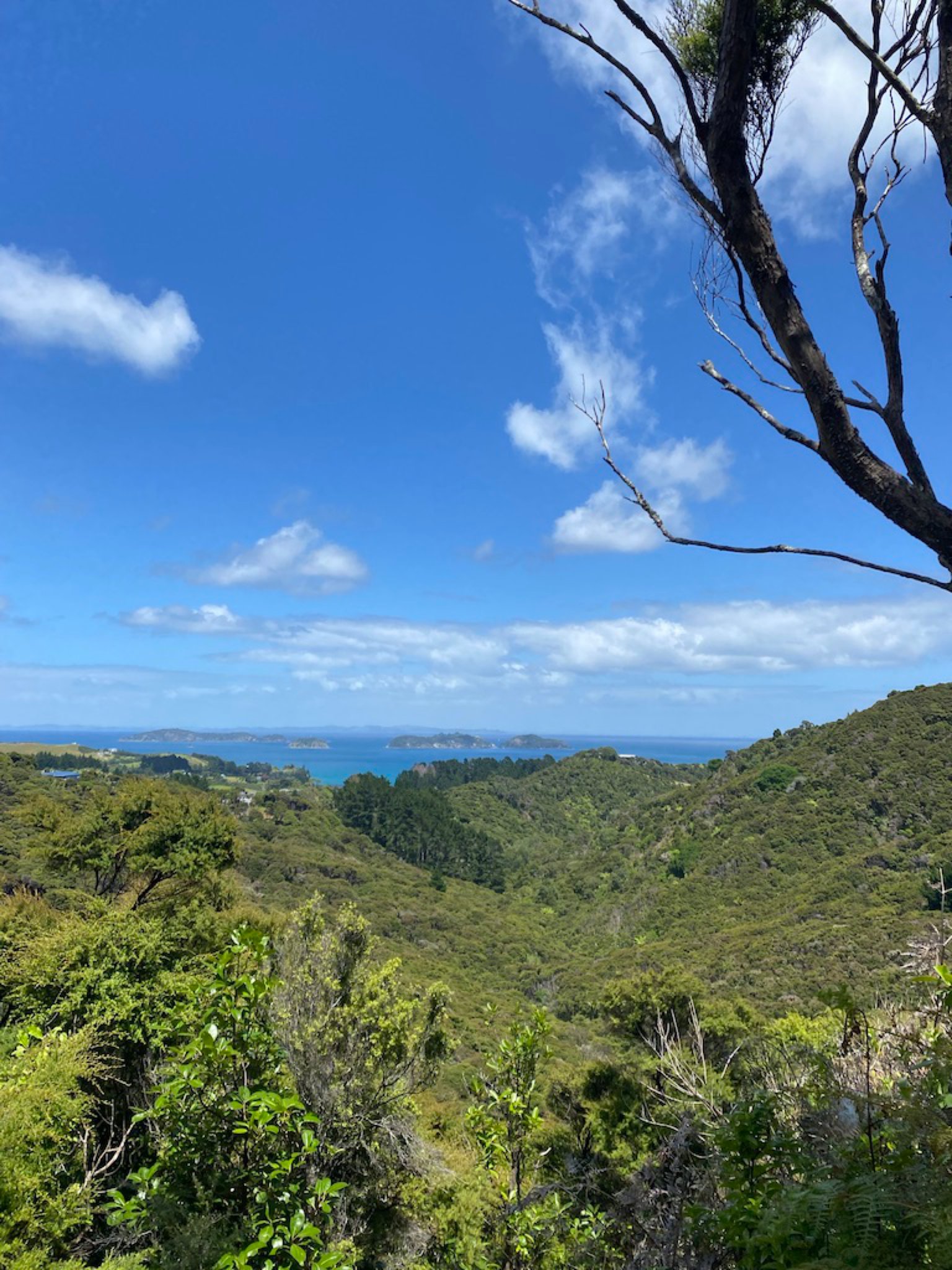 We wind on through the forest, the trees keeping most of the mid day December sun off us. 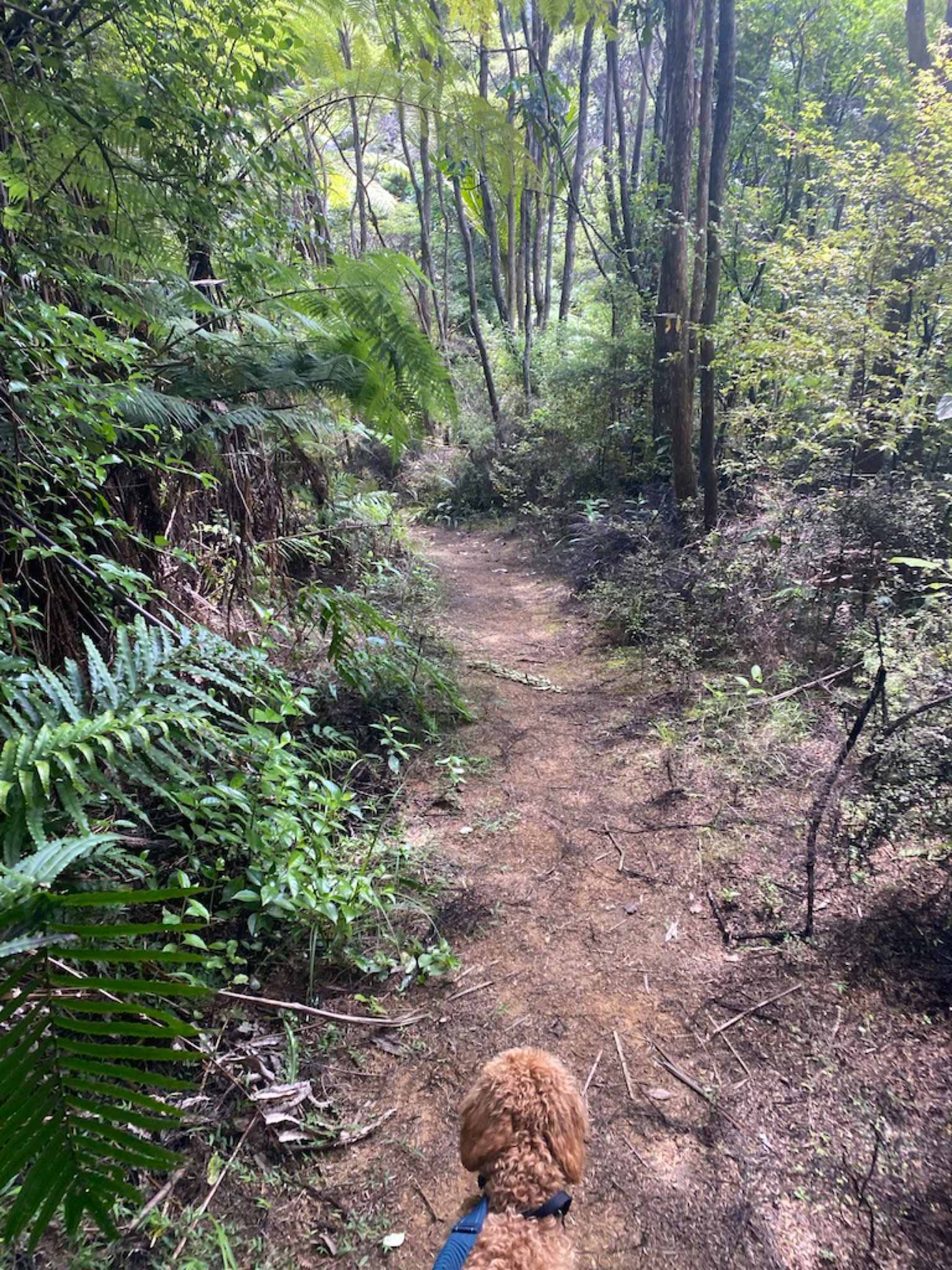 We arrive at a clearing with two paths and helpfully and old wooden sign saying track.  Now this is my kind of sign.  Enough information to keep you wandering off a cliff & hidden in a location that you’ve already had to walk 45 minutes to get to.  I did wonder what was up the other way though…. 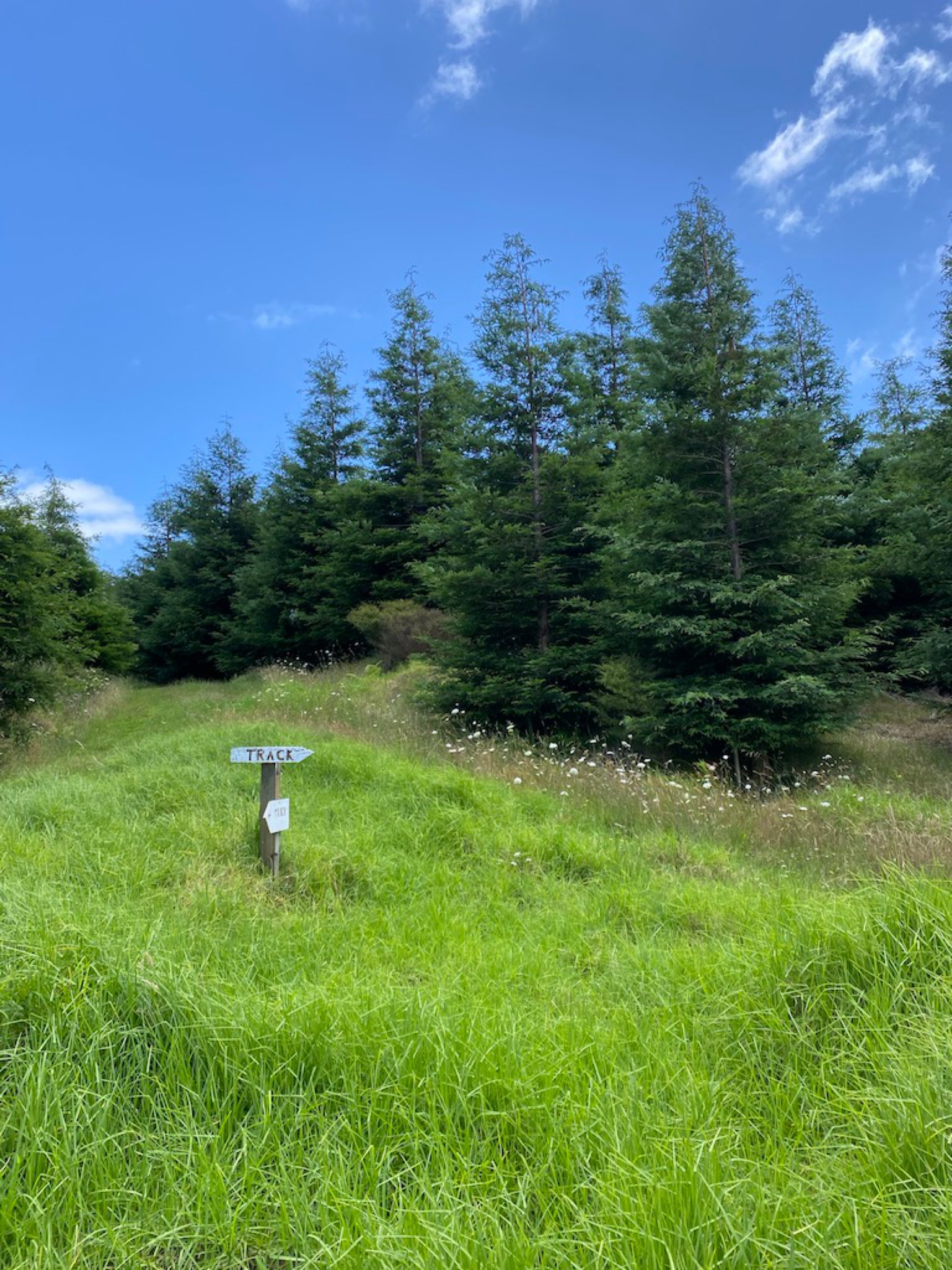 Some more winding through the trees and we come across a sign for the Colville Cemetery (on my list to visit another day now) before emerging in relative civilisation at the back of the mill.  It’s about here that Busters 7 month old puppy legs decided they’d had enough and he laid on the ground and refused to budge so I carried him a bit of the way through here (lucky he’s only 6kg and pretty cute!) 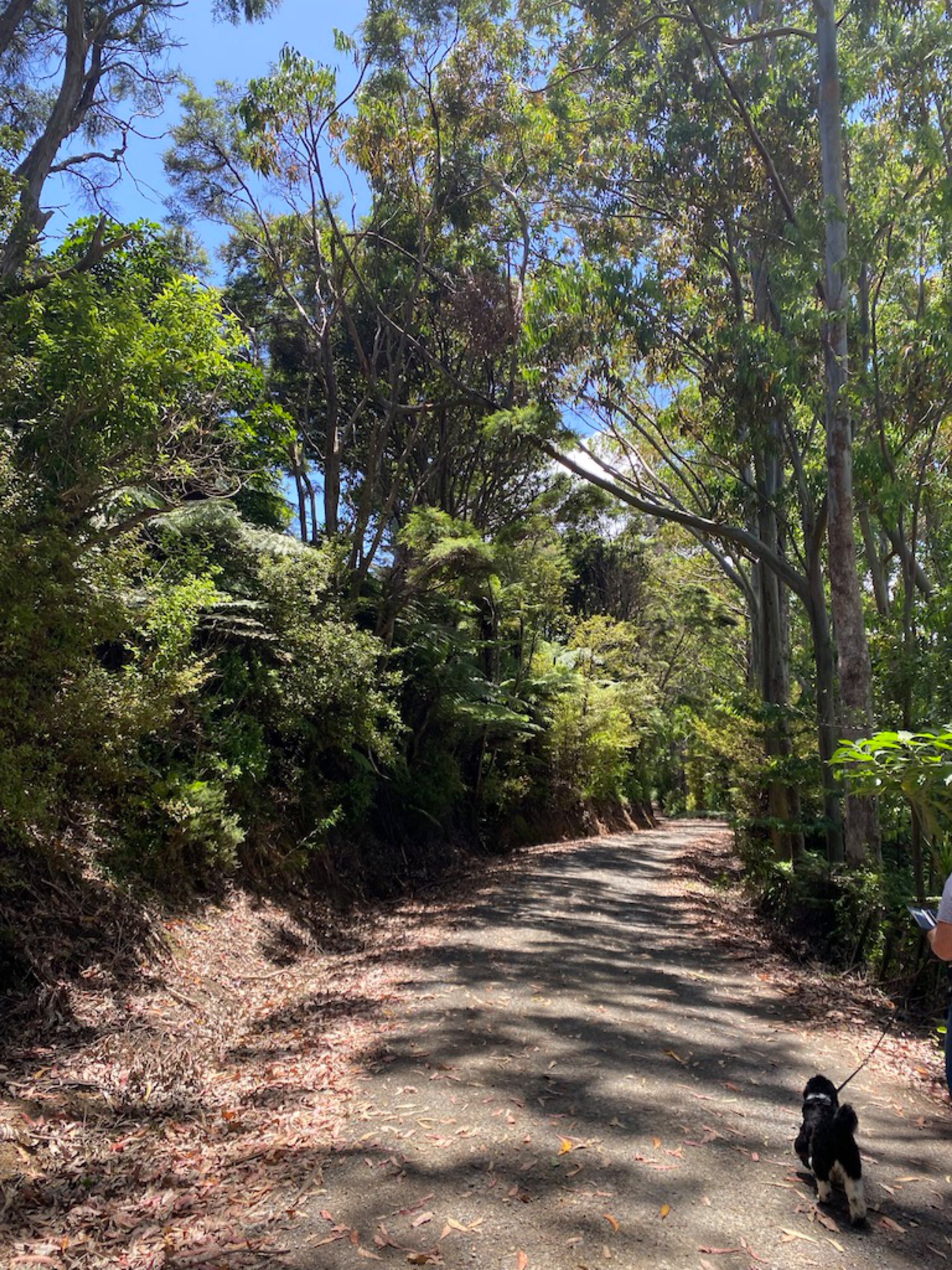 And then we are out on the main road in Colville.  Right across from the now so familiar Colville General Store.  I decided to take a picture of the sign from the Colville end so if you are leaving from this side you can find it too.

After an hour and a half of pretty brisk walking over hills we’d definitely deserved a coffee so we headed over to The Forager’s Kitchen (not my usual Colville haunt and my first time here but definitely not my last!)

It’s like everywhere this side of the Coromandel.  Laid back, a bit hippy, a bit quirky and so very quickly draws you into a slower pace of life.

Buster, asleep under the table in minutes, quickly succumbed to its charms.  And a few minutes later I was sipping a bloody good Americano wondering why I was ever scared of that hill. 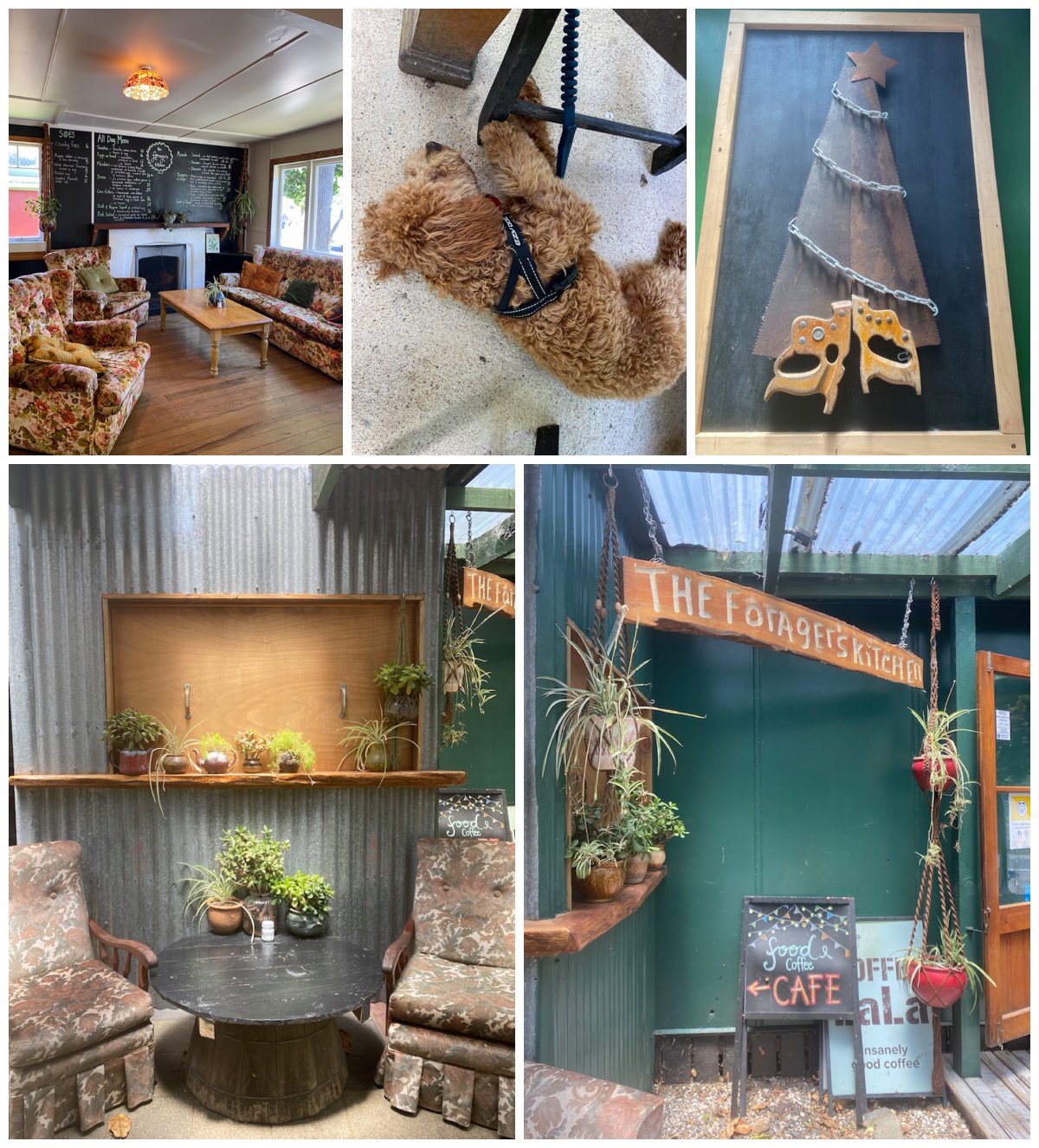 Now I said not scared, not slightly mad so we did have a ride waiting for us in Colville in the shape of James Uncle Mike.  Most people do this as a one way trip except for my neighbour who told me he drove the car over and then ran back over and walked back with the family before ferrying them over.  Maybe next year….

Which ever end you start at it’s going to be epic!  There’s amazing coffee and a bit of shopping at one end in Colville or a crystal clear beach to swim at on the other in Waitete Bay.

The walk is about an hour and a half at a manageable pace.  We passed mountain bikers but I wouldn’t recommend it for push chairs or wheelchairs.  Perfect for dogs but the littler ones may be a bit knackered by the end!