What you need to know about shopping in Singapore

Despite being renowned for it’s shopping it wasn’t originally high on my list of must do’s when I visited Singapore.  But I’m always one to be proven wrong and shopping became a highlight for me in Singapore.  Not so much for what you bought (which in my case wasn’t a huge amount) but for the experience.

Forget everything you thought you knew about malls

So I am coming at this from a largely NZ perspective so it’s easy to shrug you shoulders and say that of course malls are going to be better in Singapore.  That’s exactly what a friend of mine said until I showed her a picture of the canal in the middle of the mall with people rowing through it at The Shoppes at Marina Bay Sands. 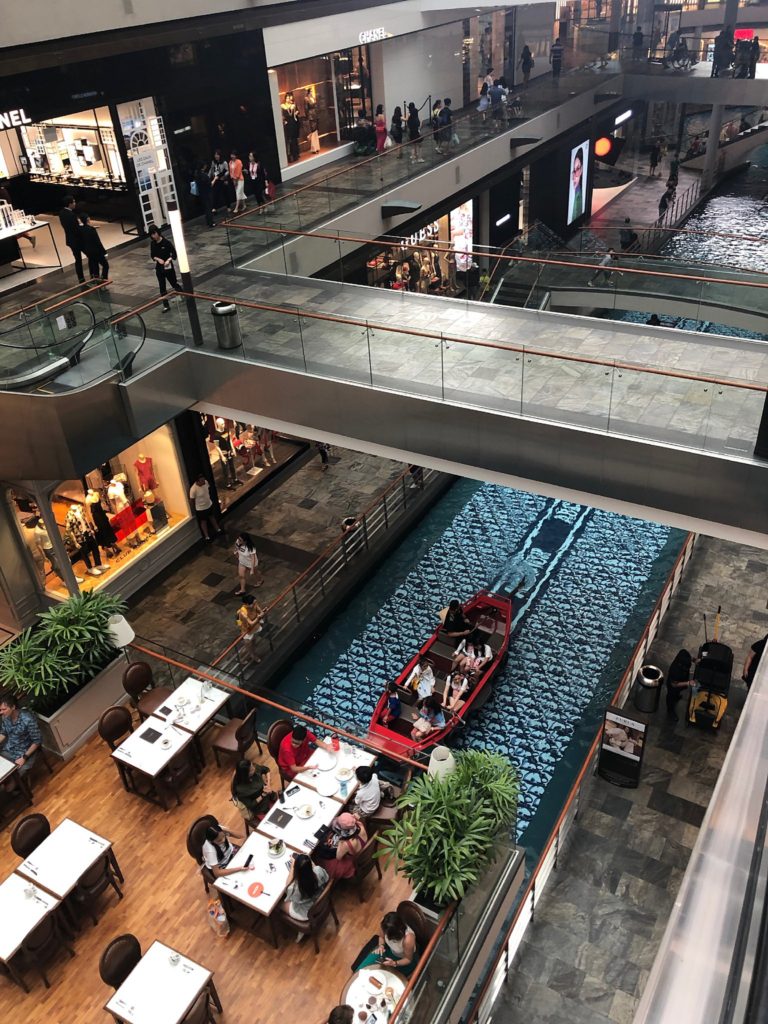 Or the monorail going past the worlds largest indoor waterfall at Jewel at Changi.

Yep, malls in Singapore are truly on another level.

My favourite for the sheer ostentatiousness of it is The Shoppes at Marina Bay Sands.

The Marina Bay Sands complex is astounding.  When it opened in 2010, it was billed as the world’s most expensive standalone casino property at S$8 billion, including the land cost.

I actually wandered in here on my first day in Singapore and in my haze of jet lag and fatigue the entry looked like just another mall and I quickly exited out the front and over to the observation deck on Marina Bay Sands.  However fortunately I headed back through in search of food on my last day in Singapore and got to fully explore it.

Well, I say fully but I’d wager I got just a fraction through it as it’s so huge!

There is literally every designer you’ve ever heard of or dreamed of owning all lined up together with gleaming windows and imposing doormen eyeing you up as you wander by.  The kids were horrified that I didn’t at least go in one but I’ve watched Pretty Woman too many times to know how that one ends as I wandered through in my active wear, sneakers and frizzy hair.

What really blew my mind in here was the canal.  Running through the designer shops was a canal, complete with a Rain Oculus that collects the rainfall to fill the canal.  And as if that wasn’t mind blowing enough – for $10 you can ride down the canal in a Chinese wooden boat.

The canal at The Shoppes at Marina Bay Sands. You can hear just how blown away I was at the time….

Used to the usual food court fare and movie theatres I was amazed to see restaurants with meals ranging up to $200 (I ate here and had a great pizza but not the $200 option) and a theatre showing the broadway production of Aladdin.

And added to this mind blowing audacious surroundings is the blissful relief from the hot, humid streets.

The thing about Singapore is that there is not just one place to shop your designers – there are many.  When I was walking along Orchard Road I was wowed by the scale and luxury of the store frontages.

It wasn’t long before the temptation of air conditioning became too much and I slipped into the mall for a bit of respite and spotted a place offering massages.  I would thoroughly recommend heading there for an hour out of the midday heat and a bit of relaxation!

Chinatown and Little India were about as opposite as it was possible to be from the cool, gleaming perfection of the malls.

It was hot and sticky, loud and colourful.

Smells came at you from every direction.  There is the unmistakable putrid smell of Durian (seriously it’s so bad it’s been banned from Singapore public transport!). And the smells of all types of asian cuisines being cooked on the street in front of you.

The shops come alive at night.  There’s no air conditioning as you navigate your way through the tightly packed colourful shops, but you’ll find heaps of great gifts for everyone at home that they can’t buy here in NZ.

There’s an Chinese man engraving necklaces with names that I get for Bella, a fan with horses galloping that I get for Kiki, a spider frozen in time in resin on a necklace that I get for Soph and chopsticks with a rabbit rest (James is born in the year of the Rabbit) for James.

There is so much choice of where to eat and its the perfect place to eat alone.  I was still rather full from my bowl of deep fried fish skins (it’s a long story). So I just went for a bowl of dumplings and sat down and watched the world go by around me.  Some of the places in here actually have Michelin stars though!

I went to Little India far too early for any food to be open yet (they are really evening places) but the visual treat of the shops and the temples are amazing to explore at any time.

I went exploring the markets in Tiong Bahru with my friend Kiwi friend Holly’s Mum (she writes an amazing blog that you should check out over here).

There is so much fresh, yummy produce and it’s all so cheap.  Everything is divided up into different areas.  There’s the flowers at the front. The fresh produce section. The wet section with all manner of fish and meats & general goods for all your packaged needs.

Such an antidote to the traditional supermarket shop.

Shopping is so much a part of Singapore that I can’t imagine a trip to Singapore without it.  You don’t have to spend a lot – just immerse yourself in the amazing breadth of experiences you get through all of Singapores unique shopping options.