Going back to Whangaparaoa Peninsula

Today I had the privilege of meeting a few of you who follow us on Getting Lost down at Army Bay.  For me, heading up to the Whangaparaoa Peninsula today wasn’t just an awesome place to get lost (which it is – and if you bear with my reminiscing I will give you the insider lowdown on the best spots to go), for me it was also a trip back in time.

Bear with me, while I go back in time

I spent my teenage years and early 20’s living on the Whangaparaoa Peninsula and around every corner – from Red Beach to Army Bay there were memories jumping out at me from long forgotten corners of my mind.

There was the party we went to in a warehouse down Arklow Lane.  There was the field that my Aunty chased me and my cousin through when she found us not at school.  There was the beach that I would rush to each day after work – stripping off my New World uniform to my togs underneath and jumping in.  There were the sheer cliffs at Army Bay that I used to stare at and write about the secrets I imagined they may hold.  The timber yard that I had my first grown up job at was still there.  So were the many flats I lived in – probably still with the outside toilets they had back then.  In fact one of the flats was for sale so I had a look – still the same little kitchen I stood in 20 years ago.

I drove past the house that I grew up in with my brothers and sister.  There was a conservatory out the front that we (me and my friends, along with James and his) had spent many hours and had all carved our names in.  I imagined it would still be there – a testament and memorial that had lived longer than some of the owners of the names that had been etched there.  I imagined that I would be brave enough to ask the new owners to go through this room and run my hands one more time over our teenage scribblings so it took my breath away to drive down that road and see that all that remained of this shrine to my teenage years was a wooden platform.

Like the conservatory that used to sit out the front of number 9 Bonita Ave, Whangaparaoa Peninsula has also changed a lot in the 16 years since I lived there – it’s got bigger, more shops, more houses but it still retains the charm it’s always had.  There are still roads with no footpaths, there’s still groups of kids walking along – carefree and laughing like we used to be, and the beaches – long, clear and barely a soul on them flanking both sides of the peninsula – they will never change.

Self indulgent trip down memory lane done – and  we’re back!

So, if you don’t fancy a tour of my old haunts – there are some amazing places to visit up on the coast and with so many beaches flanking either side of the Peninsula you are bound to find a spot with barely anyone around (especially outside of summer).

This was my teenage beach!  We would walk down here every night – collecting friends along the way.

It’s a safe swimming beach with gentle waves and clear waters.  It has an awesome creek for playing in (I do mean for kids here but grown ups I had a great time crawling around in it to get these photos so give it a go!) and a great playground.  Across the road is the Leisure Centre so there is really heaps to do.

While Stanmore Bay was my growing up beach, Manly was my home.  I lived right by Manly beach for 3 years and I would pull up in my 30 year old Hillman Hunter and run for the water for a swim after a long day at Uni and/or my job at Orewa New World.  When I first moved to Wellington I was so incredibly homesick and the first thing I would do when I arrived was just go and stand on the beach – it just feels like home to me.  It still does.

Aside from my obvious emotional attachment to this beach this is also a superb swimming beach.  Soft sand (again – personal experience from laying in it today to get a few of these shots) and a great beach to swim at.

Right at the end of the Peninsula this is one of the best spots in Auckland for photos.  It has the most amazing drift wood that creates sensational natural frames for photos.  It has sheer cliffs rising out of the ocean and chances are the only footprints on the beach will be yours.   I met a few of you there today for an awesome photo shoot (hi everyone I met!) and there were about half a dozen kids swimming in mid August.  It’s awesome and so well worth the drive up to the tip of Whangaparaoa Peninsula. 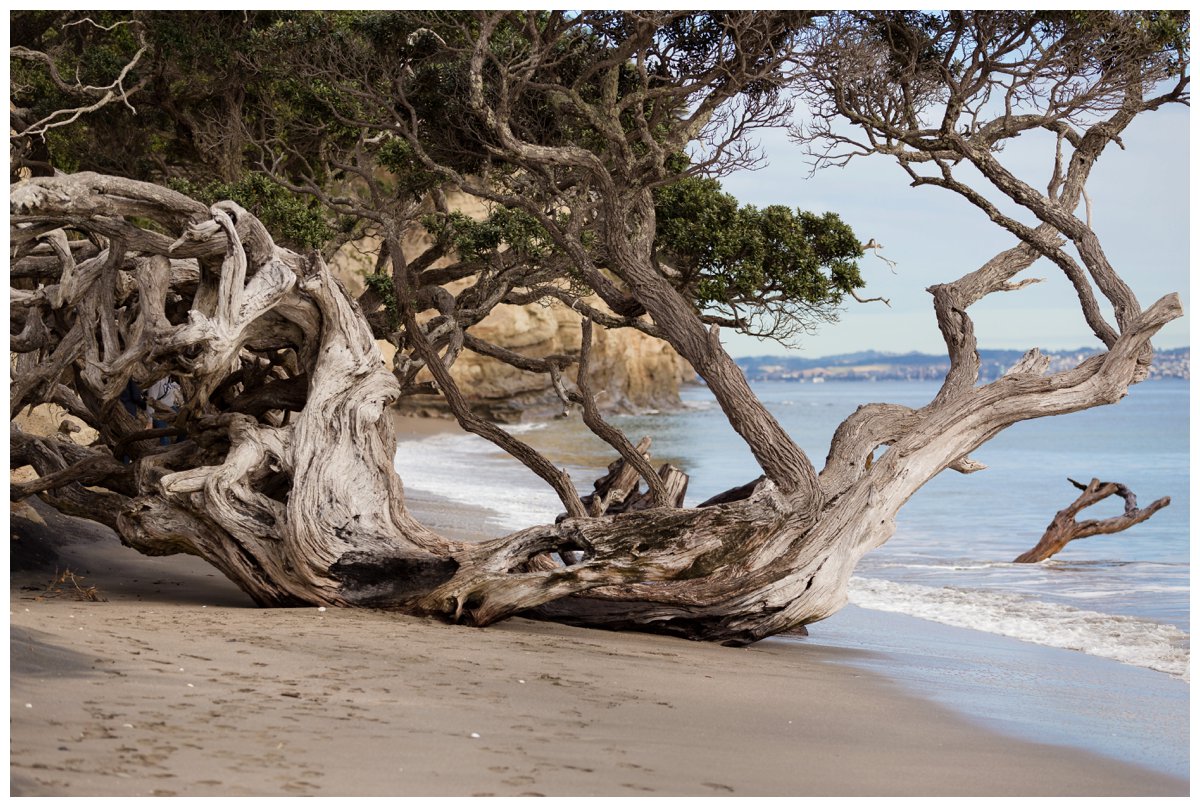 If you have come this far it would be silly not to head over to Shakespear Regional Park.  Kids will love going through the big automatic gates that protect the wildlife in the Sanctuary.  There are sand dunes, loads of native birds and safe, sheltered beaches to swim at.  Take a picnic and spend the day – it’s well worth it.  With such a wide expanse even on a busy summer day Shakespear never feels crowded. 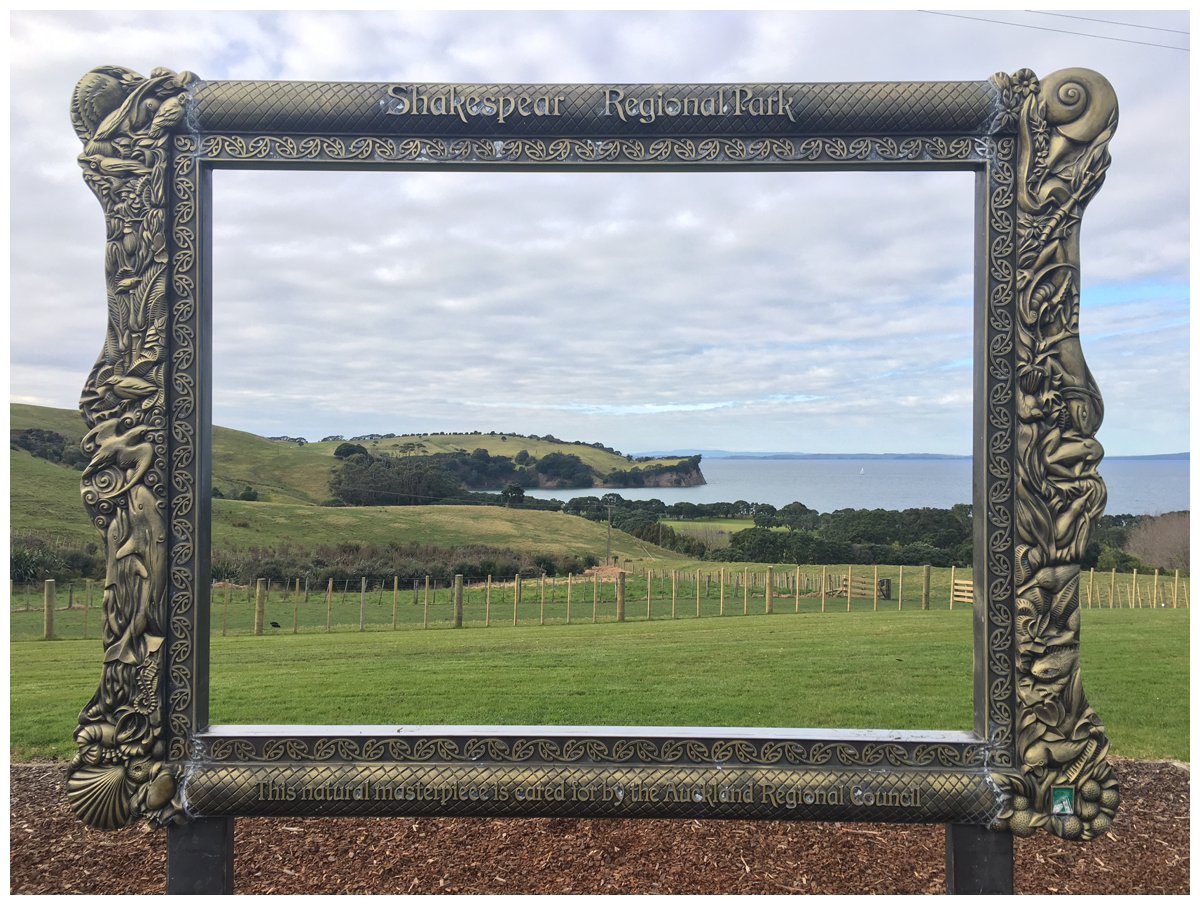 So there you have it – loads of reasons to head up to Whangaparaoa Peninsula for the day.  Pack a picnic and your togs and get lost!