I was doing a bit of googling on things to do in Mornington Peninsula last time I was over in Melbourne and Peninsula Hot Springs came up then.  I didn’t have time to head there last time, but this time it was top of my list!

James and I hired a car from Melbourne on Sunday morning and headed up the Nepean Highway.  Now it took us a lot longer than it should have because we were on a constant hunt for the coast so we kept ignoring the GPS and got lost a fair few times.  Normally not such a bad thing but when you have a massage appointment and a lunch date with one of our oldest friends it wasn’t exactly in our plans so if you do have a tight schedule like us it pays to leave at least a couple of hours for a leisurely cruise up to Fingal. 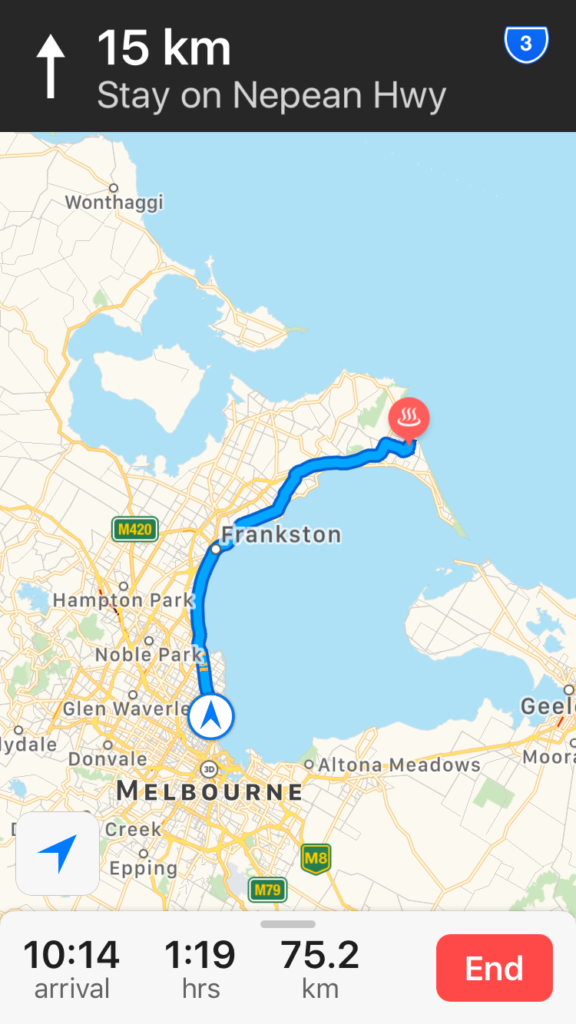 Peninsula Hot Springs are, like most good things, right in the middle of no where!  Grass and trees – different but familiar to NZ – for as far as the eye can see and in the middle of it this spa!

Bookings are essential and when we arrived at 10am it was already booked out for the day (luckily we had booked in advance).  We booked in for hour long couples massage and the adults only spa (that all sounds a bit x rated but really it wasn’t!)  Everything about it was luxurious from the moment we arrived.

We were given robes and told to head to the relaxation room where there was tea, egg chairs suspended from the roof and soft music playing.  James and I aren’t the best at being quiet and I was having a great old swing and giggling away to myself but no one seemed to mind too much!

The massages were divine.  Both James and I, nearing the end of our 48 hours in Melbourne, fell asleep for a few minutes.

After that we headed out to the pools.  With limited numbers allowed in there was never more than one other person in the pools that were scattered around the hills.  We followed wooden steps up winding paths with more chairs and hammocks.  White robes hung on posts – abandoned by swimmers as they ducked into the closest pool.

We went at the end of June – about as cold as you can get – and it was perfect.  The pools were super hot and we never felt cold.  Although we weren’t quite brave enough to jump into the cold plunge pool at the end!

When we left we felt like we had a real experience, even if as James said it was just a little bit girly.  We felt refreshed and relaxed and ready to head back to work and kids in New Zealand!  It also felt like we had two holidays in one with a day in Melbourne CBD – exploring, eating, drinking and then going to a show and then a day being pampered out in the middle of the countryside.