Taking the scenic routes in Southland

We’re big on taking the road less travelled, enjoying the journey as much as the destinations – you know all those platitudes.  But in all sincerity, if there is one place that you don’t want to take the most direct route it’s Southland.  From the wild and rugged west coast through Western Southland to the picturesque East Coast through the Catlins the drive here really is every bit as good as the destination.

Our biggest surprise was the lack of cars on the road.  Even in school holidays we felt like we were the only people around.  Which in a beautiful area like this, with the radio on and cruising down the highway in a 6 berth camper wasn’t a bad thing to feel at all.

We headed off from Te Anau to Bluff on the first day.  Intent on exploring as much as we could on the way because we knew it may be a while before we were back down this way.  With the help of Southland’s awesome website we had a list of the places we wanted to try and stop at.  As is the way with most lists we got to most of the things on the list and added a whole bunch on along the way.

The first stop was unsurprisingly unplanned.  We’d been talking to someone at a campground that we’d been visiting and they told us we had to stop into Pearl Harbour.  I was keen on the name alone so that was our first stop on our trip…

After that we headed out on the roads again.  Again those wonderful snow capped mountains followed us.

Our next stop was unplanned too after we spotted a sign for the historic Clifton Suspension bridge.  Why not we thought so off we went.  The bridge opened in 1899 and is some 111 metres long and despite having a complete and utter lack of knowledge when it comes to engineering even my untrained eye can see why it impresses.

We’d been so lucky so far with the trip but it was about this point where the wind started to pick up and the clouds rolled in.  Now don’t get me wrong – after 5 years in Wellington I’m actually somewhat of a fan of wind but it did make for some rocky moments in the camper.

It also made the rugged west coast that much more dramatic and exciting.

Our next stop was at McCracken’s Rest.  An exposed, rugged and beautiful spot to look out over the waves crashing in at almost the bottom of the South Island.  I really loved the wind and the drama of it all.

Next stop was the much talked about Gemstone Beach.  The girls had been looking forward to this beach for most of the trip and with tales of semi precious stones being found on the beach they were keen to try their luck at treasure hunting.

As with all west coast beaches on a windy day it was a wild and rugged place and the wind blew so hard it would hold you upright as you leant into it (always a favourite trick of mine).  And the sea foam whipped up off the beach like snow and flew as far as the carpark.

Eager to get to our promised BBQ with our good friends in Invercargill we made chippy sandwiches in the back of the camper in Riverton so didn’t get to see too much of the town, save for a fleeting glimpse out the window..

Right, so where was I.  Oh yes.  We’ve been to Bluff and Invercargill.  We ate a lot of great food (thanks Dave).  Explored a lot of amazing spots and now we’ve back on the road.  Determined yet again to take the most scenic route and explore everything we can on our way to Dunedin.

We had so many people over on the Getting Lost page tell us that we had to go through the Catlins on our journey and I’m so glad we listened to you all!  It’s a stunning place in the world.

We’ve written before that we reckon Invercargill may be one of the most hospitable and friendly places in the country and no one more so than our mate Dave in Invercargill who packaged up all the left overs from our sensational BBQ the night before for us to take on our journey through the Catlins.

After winding our way through deliciously beautiful rural landscapes dotted with hundred of whitebaiters in little sheds we decided to stop at Waipapa Point. We got a tip off about this place from the team at Classic Motorcycle Mecca It’s the perfect place for stopping.  Loads of history (including the 1881 shipwreck of the Tararua which tragically 131 people died in), a brilliant lighthouse and a great place to eat a picnic lunch.

We stopped at Curio Bay, an area of international significance for it’s fossilised forest dating back to the Jurassic Period.  By this point the kids were well past the promise of an ice-cream at the next shop and were keen to get back in the car.  So we perched on the top of this cliff with an impossibly steep drop in the camper and watched the waves crash below. 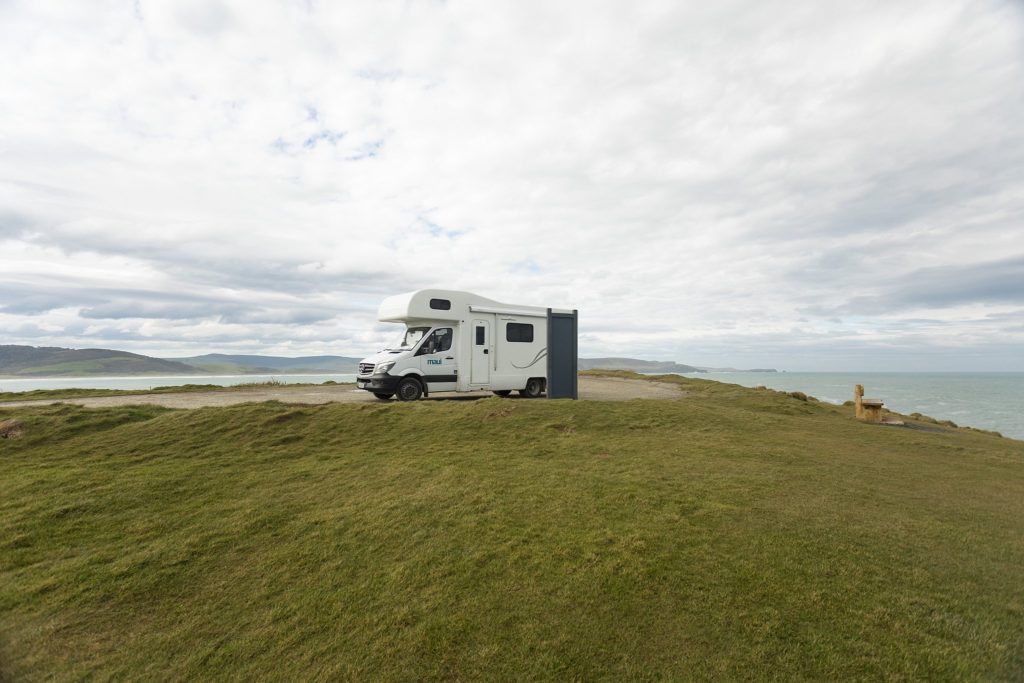 We stopped at the Florence Hill Lookout to get the spectacular views of Tautuku Bay, Tahakopa Bay and Long Point.

Before turning back to rolling pastures with roads etched into them in winding lines..

Southland, you truly are a beautiful, rugged and wild place that is an absolute joy to drive through and explore…